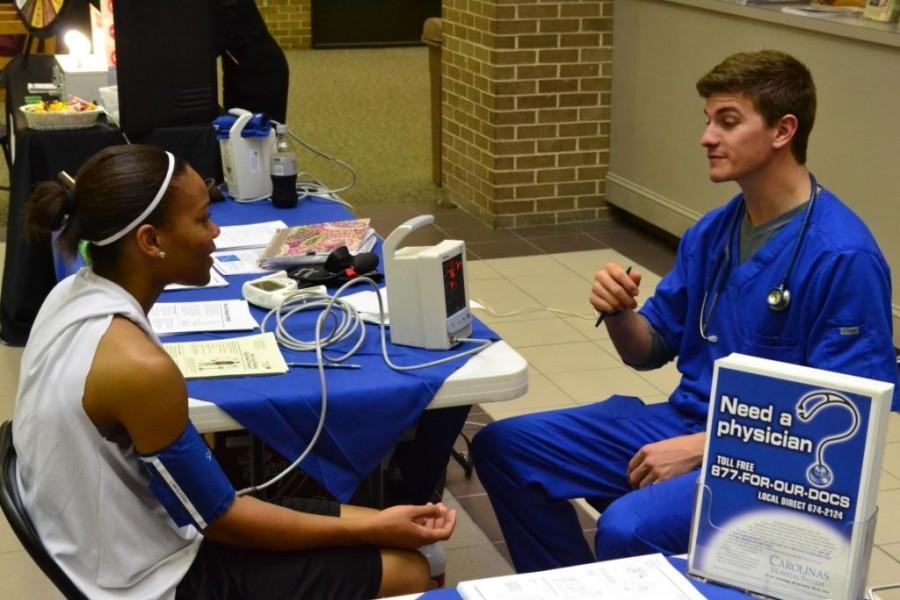 The University Programming Board (UPB) hosted the Student Health and Awareness Fair on Feb. 4 in the University Center.

Nearly 60 students and various companies attended and were promoting their projects through free prize giveaways and samples like CFL light bulbs, candy, condoms, and pens.

Assistant Dean of Students LaTasha Brand said that she was pleased with the results and that she thinks it is important to have the Student Health and Awareness Fair every year.

FMU graduate Kayla Duncan, who is now an administrative assistant at the FMU Student Health Services building, was in charge of the table for student health. She said that she thought there was a good response from the student population.

The Student Health booth gave out pamphlets relating to health issues and free condoms for the students.

Duncan said that Student Health Services attended the fair to promote sexual education among students, as well as to raise awareness of potential health issues such as high blood pressure and cholesterol.

FMU freshman Alex McIntosh said that really he enjoyed coming to the Student Health and Awareness Fair and took advantage of everything it had to offer. He said that he learned some new things to apply in his everyday life.

“I went over to Progress Energy booth, and I learned that I can buy one light bulb that lasts longer because it is more energy efficient, and I can save money,” McIntosh said.

BB&T Relationship Banker Maria Bakas manned the company’s booth, promo-ting deals for students and discussing how important it is for students to start managing their finances now.

“We are here to answer any questions,” Bakas said. “We want to get our name out there and get students to be smart about saving their money.”

“I think a lot of students don’t realize that they need to care about how high their blood pressure is,” Lewis said.

McLeod Health and Fitness representative Mischelle Anderlik promoted their gym and what it has to offer for FMU students.

Anderlik said that she thinks students believe McLeod’s gym is too expensive, but she wanted to reassure them otherwise. She said that customers have the option to pay by the month instead of purchasing a yearly contract up front.

Anderlik also said that McLeod Health and Fitness offers a special discount for students who show their school I.D.

The next Student Health and Awareness Fair will be in January 2013.

UPB wants to feature more businesses next time to further increase awareness of healthy living on the FMU campus.