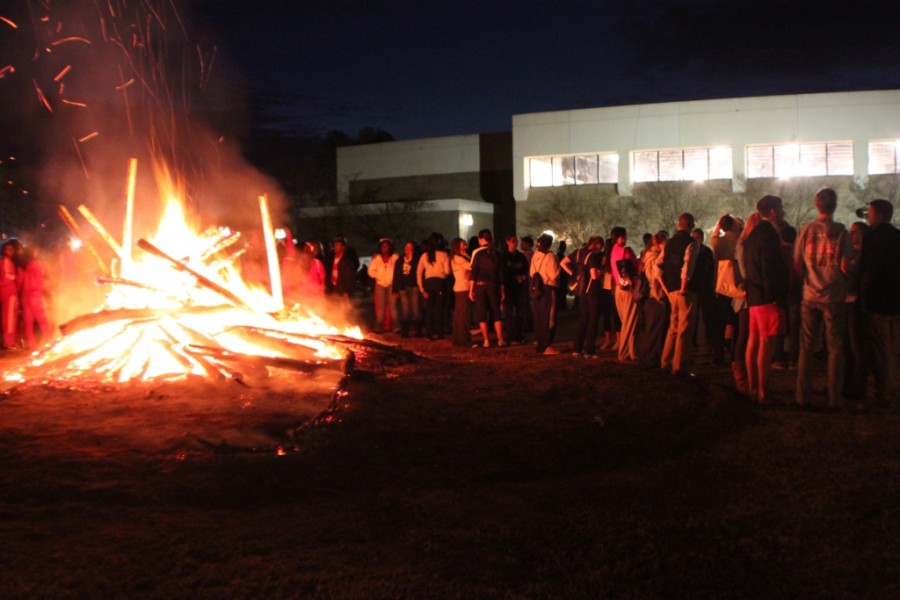 A bonfire blazed in the field next to the University Center on Friday, Feb. 17 at 6:30 p.m. as the Student Government Association (SGA) and the FMU athletic department hosted the first annual Patriots on Fire event.

The bonfire and pep rally were part of the several activities that took place during homecoming week. After the fire was lit, the cheerleaders performed a dance routine to get people excited before both the men’s and women’s basketball teams were formally introduced. The men’s and women’s basketball coaches asked students and faculty to support both teams as they took on Flagler College on Saturday, Feb. 18.

Next, the homecoming court was presented as the results of the Homecoming King and Queen were to be announced after the men’s basketball game on Saturday. The 2012 Homecoming Queen, Jessica Ellis, senior pre-nursing major, spoke about how she felt as she was on stage being introduced to those who were at the bonfire.

“I felt special because it felt like a chance for me to get myself out there and meet other students outside of working with my sorority (Delta Sigma Theta),” Ellis said.

Braylin Bloise, junior accounting major, expressed how he felt about the event as he stood by the bonfire.

“It was great. It was a nice way to interact with friends,” Bloise said. “The pep rally was my favorite because they got to introduce the basketball players and the homecoming court to everyone.”

Hot dogs, hot chocolate and other refreshments were available to those in attendance, and the bonfire served as a place for students to mingle with one another and relax with friends.

Jayde Nelson, sophomore biology major, was also among those who attended the event, as well. Her favorite part of the event was the actual fire because it brought people together and kept her warm in the chilly weather.

“The bonfire was a great place for the students and faculty to show school spirit and to get ready for homecoming festivities,” Nelson said.

Clarissa Chestnut, junior political science major, had never attended the bonfire before. The bonfire offered an opportunity to raise money for a good cause.

“I had fun by the nice, warm fire, and I also got a chance to collect donations for the leukemia foundation for the FMU chapter of the NAACP,” Chestnut said.

Elizabeth Gleason, sophomore history major, went out with her sorority, Kappa Delta, as they supported homecoming queen contestant Asya Hodgkins in her attempt to win the title.

“I thought it was a great way for people and different organizations to interact and come together in order to promote school spirit,” Gleason said.