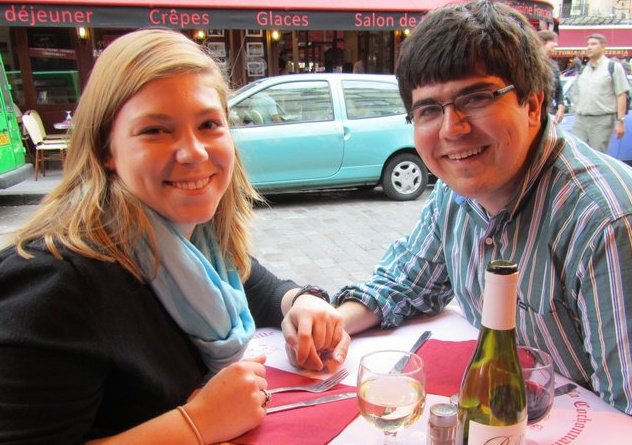 Students and lovebirds Josh Knight and Kimi Simon are currently taking advantage of FMU’s International Studies Program by spending this semester studying abroad in Caen, France.  They will celebrate their three-year anniversary overseas in April.

“I’ve always known I wanted to study abroad; I feel like college is the only place where people actually have this kind of opportunity,” Knight said.

Knight is a senior double majoring in French and English, so the opportunity to spend a semester in France especially appealed to him.

“I love languages and history, so France was an obvious choice,” Knight said.  “Here, I get to use and improve my knowledge of the French language every day.”

Simon, a sophomore, is double majoring in French and chemistry, so she was also excited to go to France, especially with Knight, who she called her “best friend.”

“I’ve always wanted to experience living abroad, and studying in France was the perfect opportunity,” Simon said. “Why France? Culture, romance, not to mention great food!”

Knight and Simon arrived in France on Jan. 25 and won’t return to the United States until May.  So far, both said that they are enjoying the learning experience in in their classes and in their new environment.

“I’ve really enjoyed making friends in my classes,” Knight said. “I’ve met and often made friends with people from Russia, Mexico, Ecuador, Japan, China, Georgia (the country), Kyrgyzstan, and all over the U.S.  Having a language in common with all these people is really cool because, in any other environment, we would have nothing in common and no way of communicating; however, here, we’re all students in a strange place, and we all – attempt to – speak French.”

“The learning experience is different because it literally never stops,” Simon said. “We can’t go to a movie, hop on a train, or buy a stamp without exercising the skills we’re learning in the classroom. (I’ve even had to use some chemistry at the grocery store – converting kilojoules to calories!)”

Like Knight, Simon said that she enjoys getting to know other international students.

“It’s crazy that there are only three Americans in my class,” Simon continued. “The rest of the students are from all over the globe. . . . The mix of nationalities makes for really interesting class discussions.”

However, the two have also experienced culture shocks, which they expected when living in a foreign country.  Knight explained that “nothing too serious” has happened, but he said that “everyday things are strange.”

“Hamburgers are hardly cooked at all, homeless people pee in the street sometimes, and the toilets on campus don’t have toilet seats; all those things were pretty shocking,” Knight said.  “Still, most of the things that are different are just that:  different, not bad.  I haven’t had any break-down-I-wanna-go-home moments – yet.”

Simon expressed similar sentiments, saying that though there are many differences, including in the bathroom, she is enjoying all of her time abroad.

“There are some things that, if not shocking, are rather peculiar,” Simon said.  “I can’t buy peanut butter anywhere, Netflix doesn’t work, and the toilet paper is pink… just to name a few. I’ve been a little homesick at times, but I haven’t made any plans to come home early!”

Knight and Simon both called their first day – the entire 30 hours it took for them to get from Florence to their hotel in Caen – the worst part of the experience so far, simply because of the exhaustion.

“We were tired and intimidated being in such a huge place, but everyday living here feels more normal,” Simon said.

Knight reiterated her point, saying, “Every day has gotten progressively better, I think, since we arrived.”