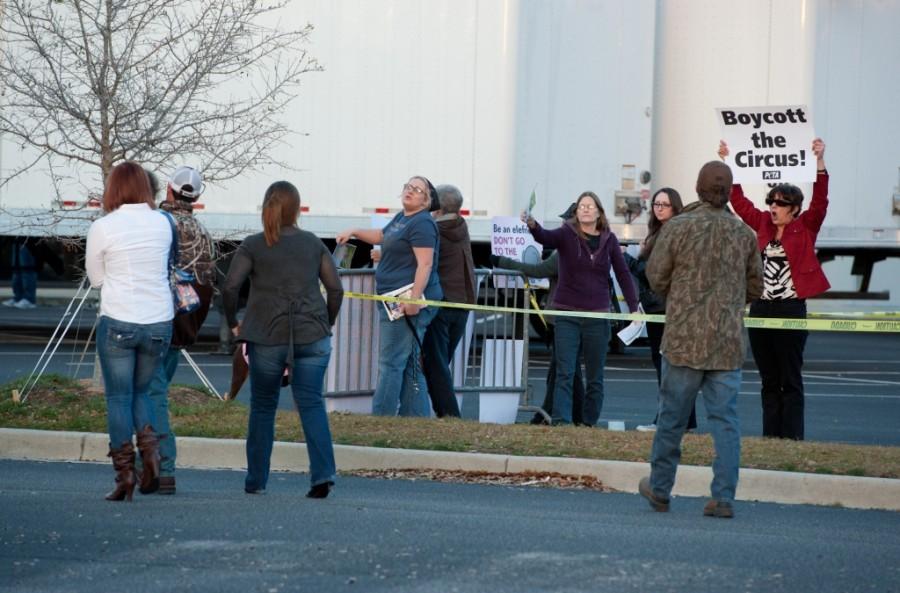 The Ringling Bros. Circus came to the Florence Civic Center Feb. 17 to 20, and the FMU Animal Rights Advocates (ARA) met them with protest signs.

On the first night of the circus, the FMU ARA showed their support for animals by protesting the circus’ use of them in the performance, as well as the cruelty the FMU ARA says the animals receive in their training.

Although the event was set to start at 7 p.m., the FMU ARA members set themselves up in the parking lot at 5:30 p.m. hoping to deter some of the people who had planned to attend the show.

The group believes in the rights of all animals, but the Civic Center protest revolved mainly around the elephants used by the circus. Many of the posters that were set up and waved by protestors told of the cruelty they say the elephants receive at the hand of the circus staff.

A few of their signs read, “Ringling Beats Animals,” “Boycott the Circus,” and “Be an ele-friend, don’t go to the circus.”

Along with the signs, the group also had comic books that are distributed by the animal rights group PETA (People for the Ethical Treatment of Animals). The comic explained how elephants live in the wild compared to the treatment that the group suggests they receive when they are in captivity.

The FMU ARA tried to give the comics to children when they walked past them to enter the Civic Center, but very few parents allowed their children to take them.

Not many of the people walking through the parking lot seemed interested in what the group had to say. More often than not, people who walked past them simply shook their heads while looking away. Others, who did look, did not engage in any dialogue with the group; they were only curious to see what the shouting was all about.

However, there were a few people who were not happy about the group protesting and made sure that they knew it. Some patrons told the activists to “shut up” and “go home.”

One patron, who wanted to be identified only as Shelley, was taking her family to the circus and listened to what the FMU ARA members were shouting while she waited to go into the Civic Center.

“It’s their prerogative, but it’s not going to stop us,” Shelley said. “Oh, and they are giving out comic books; that isn’t going to deter the kids from seeing the animals.”

Many of the parents taking small children to the circus walked them hurriedly past the group; one even told her children to “stay away from them.”

“I’ve been involved in animal rights forever, and I wanted to get students in the area involved,” Veneroso said. “I think one of the biggest problems in Florence is not that people don’t care, they just don’t know.”

Another protestor, ident-ified as N. Parker, said that this was her first time doing any activism offline, but she had done online activism for the FMU ARA before. She said that she was protesting because elephants are different than other animals in the way that they relate to members of their family.

“Elephants are the only species that mourns the death of their loved one,” Parker said.