Playwright Itamar Moses comes to campus while Theatre Department performs “Back, Back, Back” 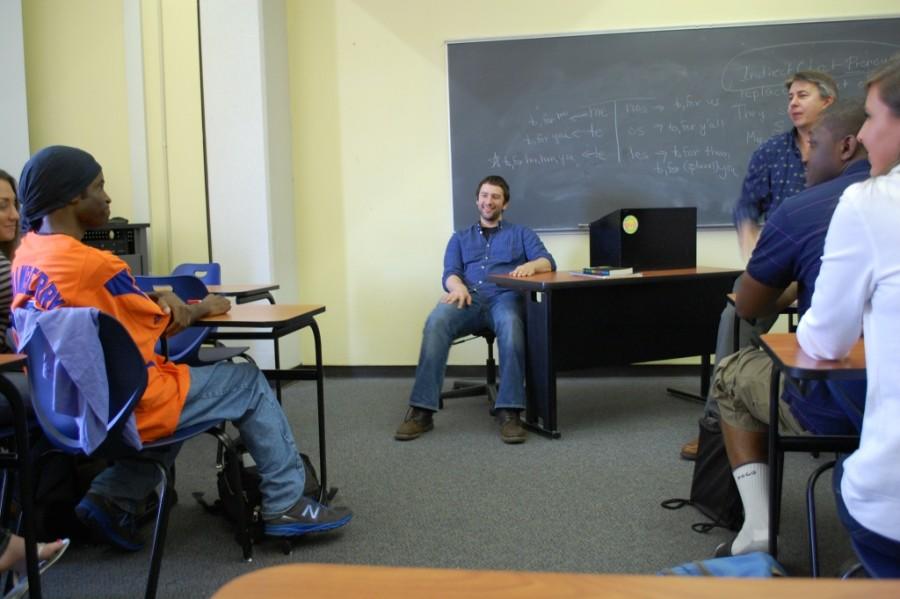 The Francis Marion University Theatre recently put on a week-long production of the play “Back, Back, Back” at the Performing Arts Center’s Black Box Theater.

Moses also visited the FMU campus and talked with various classes about his writing and career.

“I haven’t seen it performed in a few years…as far as I know this is the first time a college has performed it, and I’ve never seen college students do it,” Moses said. “There was a real authenticity to what they were doing here and…in a way, I almost like it more when my work gets done at colleges because it feels like it is closer to who I’m writing for.”

“Back, Back, Back” follows the careers of major league baseball players Raoul, played by Blake Graham, Kent, played by Chris Maldanado, and Adam, played by CJ Miller. The three characters start off as teammates and also each end up being Rookie of the Year back to back to back.

Even with such promising futures, each character begins to feel the pressure to continue to perform better and some fall to the temptation of drug enhancements. As the play progresses, the characters must battle with the side effects of their actions, the ethics of the situation and what it could mean for America’s favorite pastime.

Moses was inspired to write “Back, Back, Back” after watching professional baseball player Mark McGuire’s congressional hearing. In 2005, almost a dozen major league baseball players were called to Washington, D.C. to testify about possible steroid use during their baseball careers.

Among these players were McGuire, who the character Kent is based on, and McGuire’s former teammate, Jose Canseco, who was the inspiration for character of Raoul. The character of Adam was also very loosely based on another major league player, Walt Weiss, but while Weiss was part of the back to back to back Rookie of the Years with McGuire and Canseco, he was never accused of any steroid use.

“I hope it would provoke young people who see the play to ask that question, ‘What is the right way to live?’, because it’s something they should constantly be asking themselves,” Moses said.