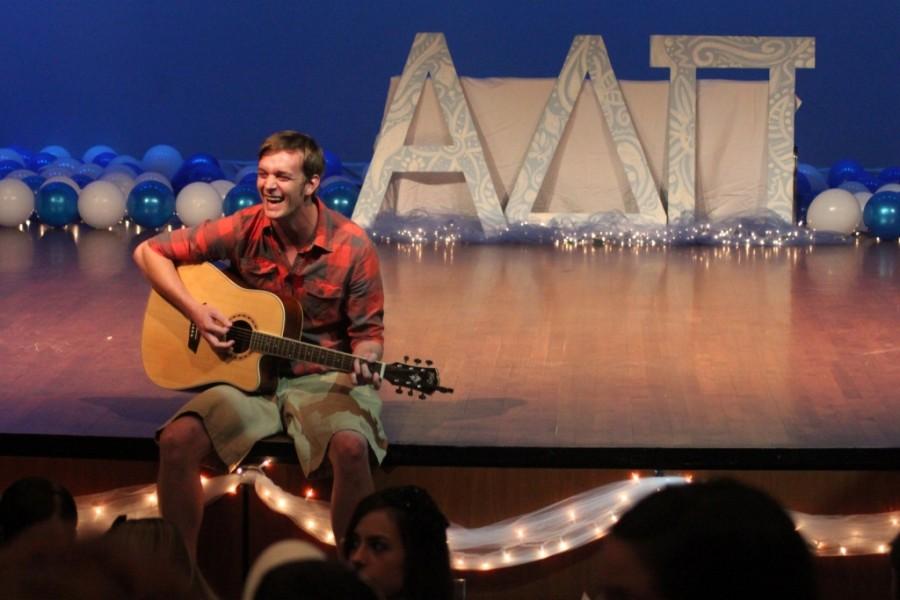 The relationship between the national ADPi sorority and the Ronald McDonald House Charity began back in 1979. Since then, the sorority has contributed countless hours and money to the charity through volunteering and fundraisers like the idol contest.

Prior to the competition, ADPi president Veronica Stark addressed the audience.

“This is an annual event that we have been holding since 2009,” Stark said. “We have been involved with the Ronald McDonald House for a while. We volunteer there every month.”

Stark introduced a slide-show that detailed some of the relationship between ADPi and the charity.

After the slideshow, Jennifer Gaskins, President of the Alumnae Association of ADPi, came onstage to share a story of her involvement with the charity. She re-counted a time when she and other ADPi members traveled to the Ronald McDonald House in Columbia, S.C. She said that there was one family that she remembered very clearly.

“The mother was very distraught. She was telling us that six months earlier she had had a little boy, and she had never touched him. He was pre-mature and was just too small,” Gaskins said.  “That day the doctors had told her that she could possibly touch her son. Two hours later, she came back to the house and told us that she had gotten to touch her son. It really blessed our hearts because that was the first time that we had gotten to see that we made a difference.”

The first performer of the night was the winner of last year’s event, Shey’Vonna McCray who sang Adele’s “Rolling in the Deep.” Next up to perform was Glenn Isom playing acoustic guitar and singing Bright Eyes’ song “First Day of My Life.”

After a 10 minute inter-mission, there was a photo tribute to the members who will be graduating this year.

Steven Coté’s performance of Vanilla Ice’s “Ice, Ice, Baby” kicked off the second round of contestants.

At the end of the night, the judges deliberated and came up with a first, second and third place winner. Zac Greenwood won first, while Lindsay Williamson came in second with her rendition of “Let’s Give Them Something to Talk About” and McCray took third.

Homemade french fry sleeves lined the walls of the auditorium with the names of the event’s premium sponsors. Some the sponsors included Mellow Mushroom, Kohl’s, Harris Pest Control and Shaw Lumber Co. Each of these sponsors contributed $75 to the night’s fundraising efforts.