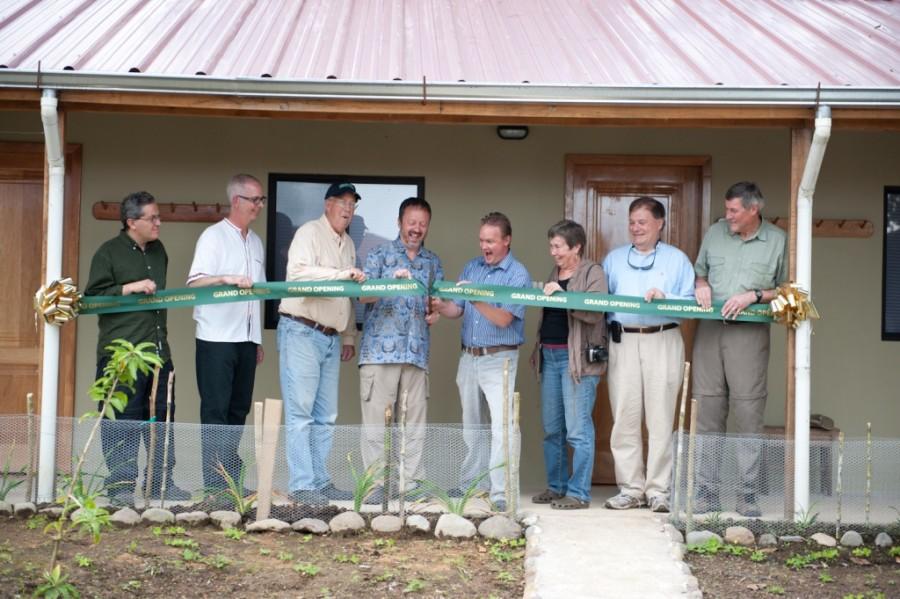 Tropical Ecology will be offered as the inaugural course at the newly-dedicated Wildsumaco Biological Station during the Summer II session.

Director of the Wildsumaco Biological Station and Associate Professor of Biology Travis Knowles explained the purpose of the station.

“We gather today to dedicate this new research station,” Knowles said. “Its missions include scientific research, conservation of Ecuador’s biodiversity, and service to scientists, students, and citizens of Ecuador, the United States, and Planet Earth.”

After the dedication ceremony, everyone gathered to watch the ribbon cutting ceremony take place. In Wildsumaco form, the grand opening ribbon was cut with a machete. After the ribbon cutting, the attendees celebrated with food and drink including a whole pig cooked in the native Ecuadorian style.

Knowles’ role as director includes both academic and research program coordination and development at the station.

During the Summer II session of classes Knowles will be teaching the first course offered at the station, Biology 314:  Tropical Ecology. The only prerequisite for this course is Biology 106.

This course will fulfill the ecology requirement for students majoring in biology, but it will also serve as an elective credit for others.  Knowles said that the Biology Department is accepting enrollment petitions from students with strong academic backgrounds and interests in travel study.

Knowles expressed his excitement about the class and explained the benefits and experience students can gain by taking it.

“This class could be the premiere ecological experience of a lifetime,” Knowles said. “Our new station is in the heart of the most biodiverse rainforests on the entire planet! We’re conducting research on rare cats, reptiles and amphibians, monkeys, and other species. In addition to the educational aspects, students will also get to experience another culture. The local village near the station is inhabited by Quechua speaking Ecuadorian natives, and students will get to work alongside local residents who serve as staff and assistants at the station. . . . It’s a true travel study experience that can expand the environmental and cultural literacy of any student.”

The class will last from July 9 to Aug. 9 this summer.

Knowles said that the research at the station has been going well so far.

“We’ve had a tremendously successful ongoing project using camera traps (motion sensitive game cameras) to monitor a beautiful, small, spotted tropical cat, the Margay,” Knowles said. “We have documented the highest abundance of Margays so far in the scientific literature inside Wildsumaco Wildlife Preserve. We think we have a real ‘hotspot’ for continued study of this rare and declining species.”

Other rare animals in addition to the Margay have also been documented by researchers at the station since it began operating.

“In addition, we are documenting for the first time a number of spectacular and rare mammals inside the nearby Sumaco National Park,” Knowles said. “Our cameras have captured images of the critically endangered Mountain Tapir, the high elevation Spectacled Bear (a very unusual bear that feeds on bromeliad bracts high up on tree branches!), and what we believe will soon be described by other biologists as a new species of Coati (a member of the raccoon family).”

Knowles said that he was thrilled that students are going to have the opportunity to come to the station and be “an integral part of this exciting venture.”

“Traveling to the tropics may seem a bit outside the ‘comfort zone’ of many students and faculty,” Knowles said.“It does require flexibility, and a willingness to try new things. But this two-week trek to the heart of Earth’s most biodiverse forests can be a transforming experience. I encourage any interested students to contact me for details.”

Students interested in learning more about the station or discussing the course offering can e-mail Knowles at tknowles@ fmarion.edu.