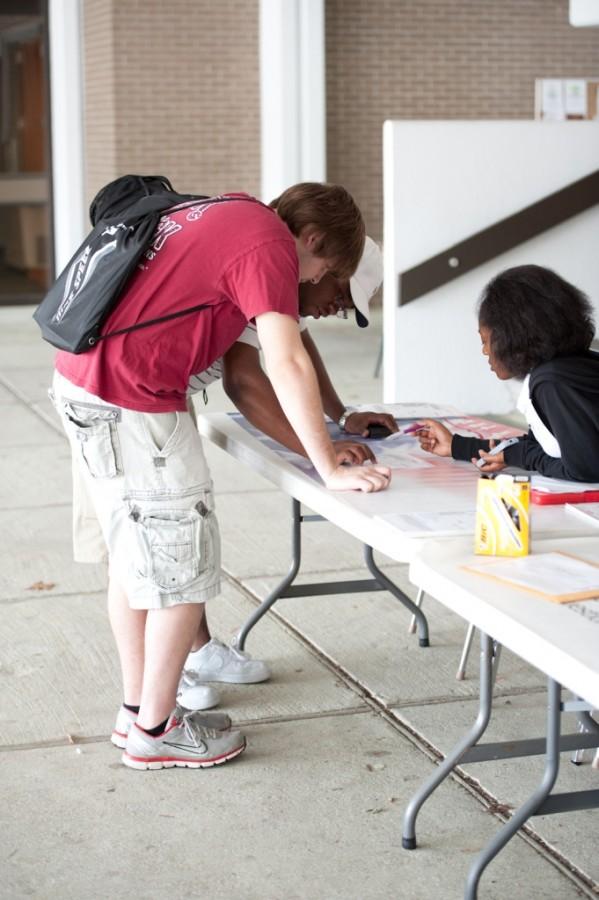 On March 20 in the breezeway between Founders Hall and Cauthen Educational Media Center, the College Democrats and the NAACP organizations of Francis Marion University held a voter registration drive from 9 a.m. to 2 p.m.

This is not FMU’s first registration. The First Chair Vice President of the FMU NAACP Jacques Cook said that the voter registrations are very frequent.

Cook, a junior sociology major, said that on March 20 alone, a little over 20 people at FMU signed applications.

“We go out into the community on weekends to do community service projects and voter registrations,” Cook said.

The students who participated in the voter registration table had a secure lock box for filled out applications.  According to Cook, the lock box is extremely safe, and the members of the two organizations check to make sure that all the information is filled out on the applications.

The Membership Committee Chairman of the FMU NAACP Justin Smith, a senior  finance major, said that procedure meetings were held in order to emphasize the importance of the lockbox.  It protects the demographics and privacy of the students who fill out applications.

“Social security was the main focus, because a lot of people are worried about giving that information out,” Smith said.

The two organizations volunteered to conduct voter registrations and found the means to accomplish that.

“To do this, we went through the local voter’s registration committee,” Cook said.  “It did not take even a week to set everything up for today, because we are very organized.”

Cook said that  usually the following Tuesday or two days after the voter regis-tration, the forms will be brought to the local precinct.

This year’s voter registrations are more crucial because they fall in a presidential election year.  Cook wants students to engage in politics.

“You frequently hear that students and young adults don’t want to participate in government issues, but this is our chance to stand up and make a new revolution,” said Cook.

The groups make sure that there is no political party segregation or pressure on students filling out forms.  According to Cook, some college students still shy away from voting.

“A lot of people don’t want to register because they think they can get called for jury duty,” Cook said.

“Over this past school year, we’ve increased the number of voter registration drives,” Glymph said. “It’s important that youth are involved in the political process.”

The College Democrats have worked with other groups before with voter registrations.  This year is especially important for voting because of the upcoming election.