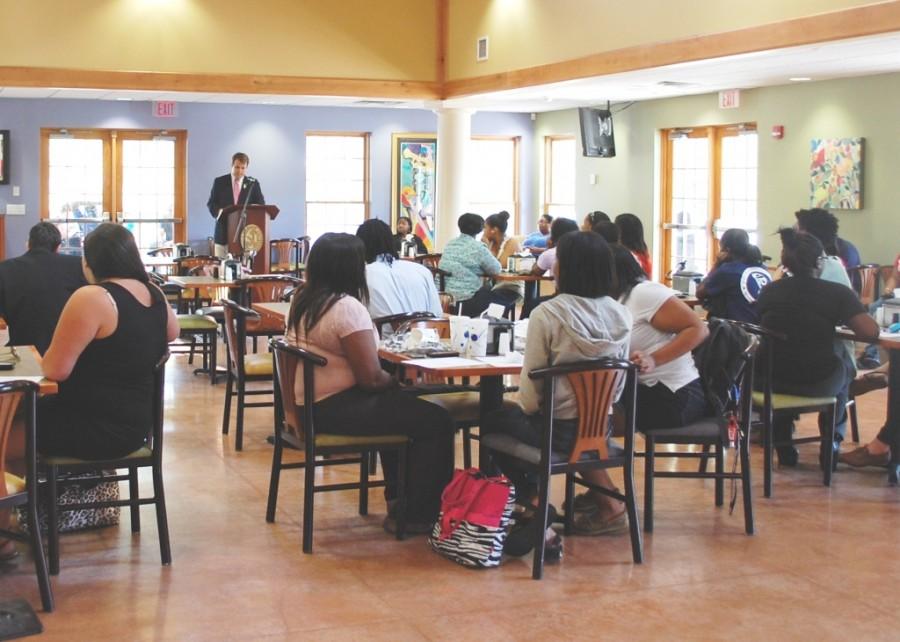 Representing the pride of the FMU student body, the Student Government Association (SGA) came together to deliver the State of the SGA address on Thursday, March 22 at 4 p.m. in The Grille.

“SGA has served its purpose this year by building bridges within the FMU community,” Simpson said.  “Patriots are now united.”

The State of the SGA address has not been delivered since 2006.  It was brought back to campus this year.

The State of the SGA address provides an account of what the SGA has done and will do on the FMU campus.

Simpson recalled events such as the 2012 Patriot Pride Homecoming Parade.

“This parade not only was a great success, but it also brought everyone, including faculty and staff, together for the betterment of Francis Marion,” Simpson said.  “As Dr. Carter said at my first meeting with him, the Homecoming Parade is a tradition that we need back and something we hope to continue in the years to follow.”

Simpson delivered the address and articulated acknowledgment to those who helped make this event a success and to help to better the FMU community.

“I couldn’t do it all myself; I would personally like to thank the advisers, executive officers, the Judicial Council, but most all the 2011-2012 Senate,” Simpson said.  “The Senate has been one of the hardest working bodies that SGA has seen in years.”

Simpson closed the address by reflecting upon statements made by FMU President Dr. Fred Carter.

“SGA has done a remarkable job this past year, from the student legislature, to organizing the Home-coming Parade, and the voluntary incentives pushing through student government,” Carter said.  “This has certainly been a banner year for SGA.”