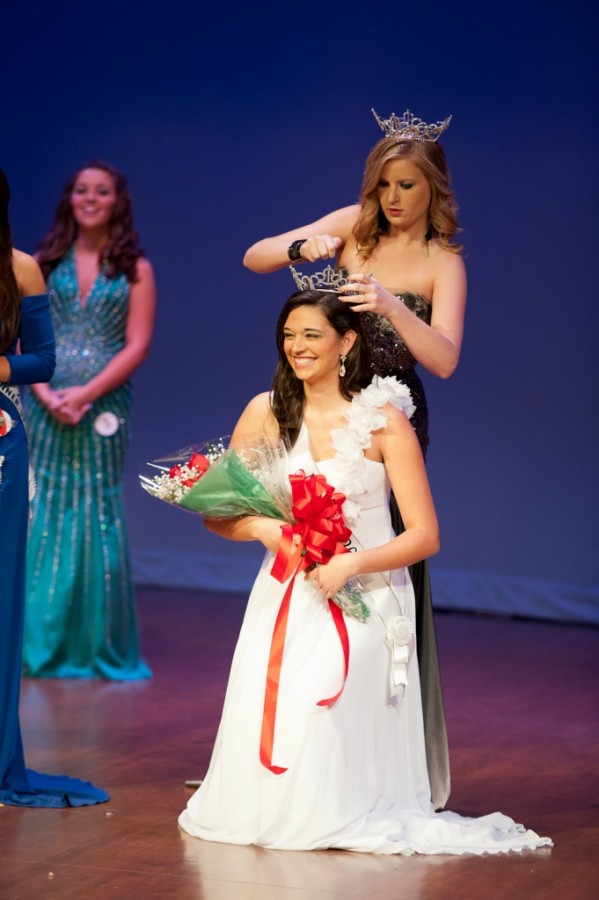 When the words “the moment you’ve all been waiting for” were announced, the audience grew still as Lauren Balutis, junior early childhood education major, was crowned Miss FMU 2012 on Thursday, April 5 at 7 p.m. in the Chapman Auditorium.

“I feel honored to be able to call myself Miss FMU 2012,” Balutis said.  “So many people have shared their congratulations with me, and I’ve felt lots of love from my fellow students and friends on this accomplishment.” “I’ve come to know the FMU community so much from the past three years; I really wanted the opportunity to represent our school.”

This year’s theme for the Miss FMU Pageant was “Bollywood.” The pageant opened with a choreographed dance of all the contestants to the song “Desi Girl,” by Shankar Mahadevan.

After introducing themselves, the contestants revealed their casual wear, the little black dress.  The contestants accessorized their ensemble with something that showcased their personalities.

Once the contestants modeled their attire, the panel of judges, which consisted of three professors and two staff members, was introduced.  Dr. Beckie Flannagan, professor of English, expressed delight in being a judge.

“This is the third year I’ve been a pageant judge,” Flannagan said.  “I enjoy meeting all of the contestants and learning more about the aspirations of the students at FMU.”

Following a brief intermission, the girls returned to showcase their formal wear.  While walking onto the stage, more information was given about each contestant.

After all the girls modeled their formal wear and retreated the stage, a slide show was shown of various pictures of each contestant, capturing images from childhood to present day.

Before crowning the next Miss FMU, Miss FMU 2011, Cari Ellen Hicks, did her final walk, escorted by her father.

“Being Miss FMU was lots of fun,” Hicks said. “Sometimes it was hard work, but seeing the effects of the hard work really paid off.”

Hicks expressed her pleasure in crowning Balutis as this year’s Miss FMU.

“Lauren is an amazing girl,” Hicks said. “She is sweet, silly, and fun and views life as a gift, something to embrace and enjoy … She will make a wonderful representative for FMU, and I know that she will have as much fun with it as I did.”

“I’ve known Lauren for several years, and I believe she is a good representation of FMU,” Todd said. “She is very sweet and caring with a lot of leadership abilities.”

First runner up, Rachel Rushing, expressed her enjoyment in participating in the pageant this year.

“This experience enabled me to interact with faculty members through the interview process, as well as with students I would not normally see on a daily basis,” Rushing said.  “The speaking and leadership skills I have acquired as a result of participating in the pageant will be very beneficial in the future.”

Jennifer Coker, a sophomore English education major, voiced her opinion on this year’s pageant as a spectator.

“I thought the pageant was beautiful and very well set up,” Coker said. “I am very proud of all the ladies for getting out there and trying their best.”