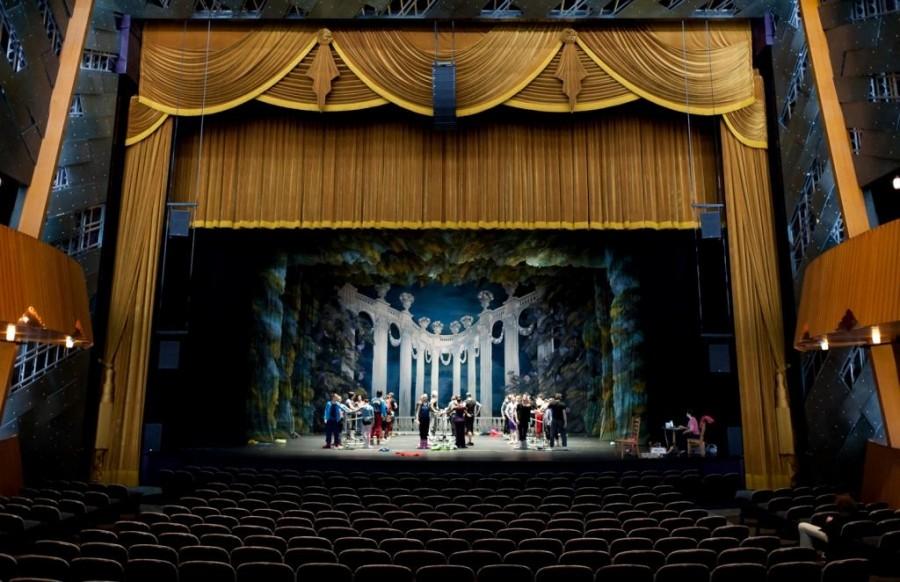 Florence residents were treated to an evening of dance when the Moscow Festival Ballet performed at the Francis Marion University Performing Arts Center (PAC) on Monday, April 9 at 7:30 p.m.

“Opportunities like these are a vital part of the university experience and show FMU’s commitment to providing an enriching cultural experience,” Sims said.

The performance was held on the PAC’s mainstage and featured two separate dances with several set changes within the performance.

The first dance, “Chopinina,” which first premiered in 1907, was choreographed by Mikhail Fokine. Instead of following a typical storyline, the progression and movements of the dance are supposed to represent a young man’s dream. The dance starts with a large group of ballerinas frozen in position who play the roles of nymphs.  Throughout the performance, the nymphs stay along the edge of the stage and continually unfreeze, dance, and then refreeze. While the nymphs are frozen, the romantic youths, danced by Mikhail Mihaylov and Aydoz Zakan, dance together between them.

The second dance, “Romeo and Juliet,” was a full length ballet that follows the storyline of the famous William Shakespeare play. The performance opens up at a dance held by the Capulets. Romeo Montague, danced by Dmitry Schsemelinin and Aydos Zakan, enters with his friends, Mercutio and Benvolio. Romeo meets Juliet Capulet, played by Ekaterina Egorova and Maria Sokolnikov, at the dance. As the performance continues, the star-crossed lovers secretly marry amid many fights and deaths between their two families. The performance ends with the couple killing themselves, but not before they dance as lovers one last time.

Sims said that many of the audience members of the performance commented on the technical expertise of the Moscow Festival Ballet dancers and on how colorful the costumes and set backdrops were.

Dr. Elena Eskridge-Kosmach, assistant professor of history and an attendee of the performance, not only enjoyed the dances personally, but also was glad that people in Florence got the opportunity to see a classical Russian ballet performance.

“I am originally from Minsk, Belarus and the city is very famous for its Opera and Ballet theatre, so it was wonderful to enjoy the classical Russian ballet here, in Florence,” Eskridge-Kosmach said. “Of course it was adjusted to the conditions of the PAC…the size of the stage and the duration of the performance, but it was wonderful.”

Schedules and information about future performances can be found online at the PAC’s website, www.fmupac.org.