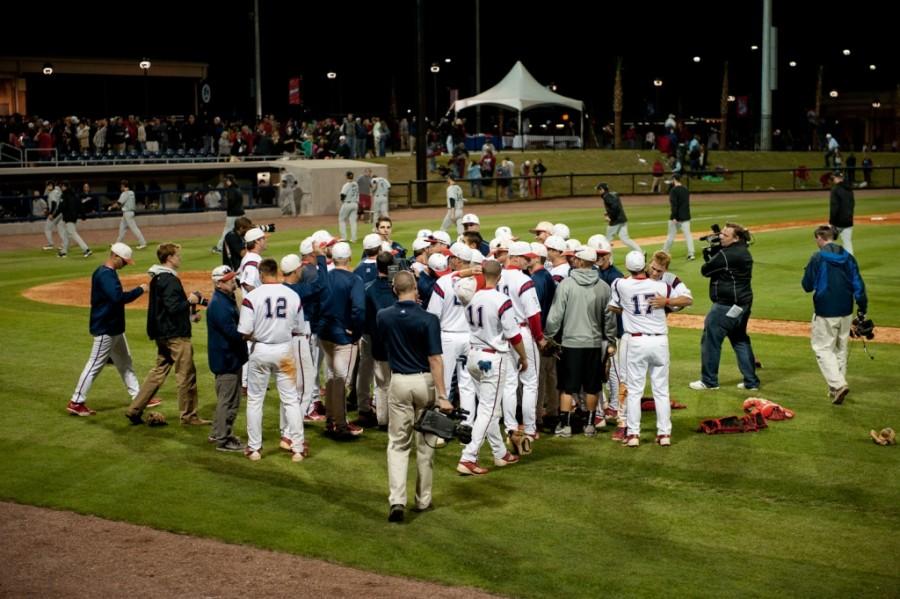 It was an historic night that Patriots players, coaches and fans will not soon forget. A capacity crowd of 1,755 watched with excitement on Wednesday, Apr. 11, as the Francis Marion University Patriots’ baseball team defeated the defending Division I national champion South Carolina Gamecocks, 5-4.

“It was a long time coming,” Wilson said. “The stadium looked perfect. The guys really did a great job of not being nervous. You could see the emotion in the players.”

Wilson also said that the coaching staff was concerned before the game that the FMU athletes would be too excited, but he then said that he couldn’t have been prouder of the way his guys handled the evening.

Wilson, who went 2-for-5, received a compliment from his assistant coach, who said that Wilson had a great night.

The Patriot faithful celebrated the first of many runs scored at the new stadium, when junior second baseman Tyler Hibbs drove home the first run of the night with an RBI single to center field. Senior center fielder Buddy Sosnoskie followed with a run-scoring single to left center, taking second base on an unsuccessful throw to third. And after a pitching change by USC, Hibbs scored the third run on a wild pitch by junior right-hander Patrick Sullivan.

Meanwhile, junior first baseman Christian Walker had a huge night for USC, going 3-for-4. Walker scored the Gamecocks’ first run in the fourth with a massive 372-foot solo home run to left field, bringing the fans from Columbia to their feet.

The Gamecocks scored their second run on an RBI single up the middle by junior catcher Dante Rosenberg, trimming FMU’s lead to 3-2 in the top of the fifth.

The Patriots bent but did not break. With the tying run at second base, FMU senior southpaw Matt Broderick (6-1) got the third out by covering first on a ball that escaped junior infielder Stephen Tarkenton at first and was flagged down by Hibbs in the hole between first and second.

Robbie Wilson said that Broderick’s play throughout the game was huge because it gave the Patriots a chance to win. Wilson also praised Broderick for holding USC to two runs in five innings.

FMU added a pair of two-out runs in the seventh to take a 5-2 lead. Michael Wilson reached on a fielder’s choice grounder, stole second and then moved to third after back-to-back walks to junior Tyler Hibbs and senior outfielder Buddy Sosnoskie.

On what his assistant coach called the biggest play of the game, Stephen Tarkenton poked an 0-1 pitch from USC freshman pitcher Evan Beal up the middle to score Wilson and Hibbs, giving the Patriots a 5-2 advantage.

“It was just one of those seeing-eye singles,” Wilson said.

But Walker would strike again for USC, connecting on a run-scoring single in the top of the eighth to cut the margin to 5-3. USC would score no more in the eighth, however, as FMU sophomore pitcher Jeffrey Stoner stranded two USC runners by striking out freshman infielder Joey Pankake.

Though they trailed for most of the game, the Columbia crew refused to go down without a fight. In the ninth inning, freshman pinch hitter Kyle Martin sliced the deficit to just one run with an RBI groundout.

The tension rose to its highest point with USC pinch hitter Sean Sullivan at the plate against Stoner and the tying run at second base. But Stoner would win the battle, inducing a sharp line-out to right field for the final out, sending the sell-out crowd into hysteria.

FMU freshman mass communication major Chelsea Morgan was among the many in attendance to witness the opening of the new stadium and the thrilling FMU victory over USC.

“Everyone seemed extremely excited about the game and pleased with the new facility,” Morgan said. “It was nice to walk across the street to get to our new, beautiful stadium!”

The victory improved the 20-ranked Patriots’ record to 27-13 and dropped the Gamecocks to a record of 24-10. Francis Marion will end the season at home on April 21 and 22, against Peach Belt Conference foe USC Aiken.