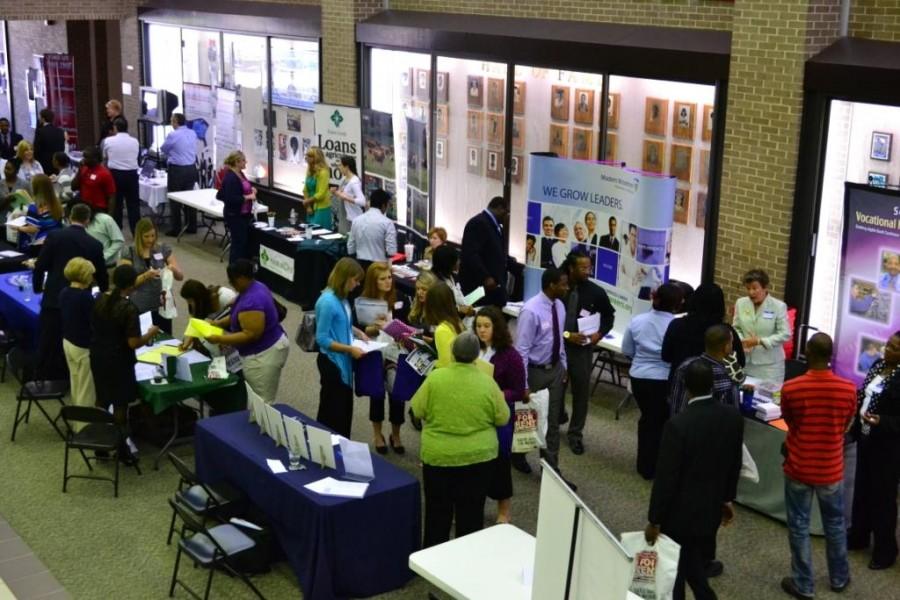 The Francis Marion University Office of Career Development hosted the Spring Career Fair in the University Center commons and gym on Wednesday, April 11 from 12 p.m. to 2:30 p.m.

Janice Smith, senior administrative specialist and organizer of this year’s career fair, said that a total of 56 companies registered to attend.

Some of the companies included McLeod Health, Honda of SC, Colonial Life, ArborOne Farm Credit and WIS Television.  Schools offering graduate programs, such as The Citadel, were also present.

Casey Pitts, Vice President-HR Manager of ArborOne, said that 22 to 23 of their employees have graduated from FMU, most of them from the School of Business with accounting and finance backgrounds.

Smith said that this semester’s career fair was slightly different from those held in previous semesters.

“It’s usually the same companies every year,” Smith said.  “We had an increase of new companies who are interested in hiring our students.”

According to Teresa Ramey, Vice President for Student Affairs and Dean of Students, these career fairs are beneficial to students’ futures.

“It gives them an early exposure to employers prior to graduation,” Ramey said.  “They’re here for a career.  Whether they are going directly into the workforce or into graduate school, being exposed to the career fair contributes to the fundamental reasons for attending the university.”

Ramey also commented on how well Smith did as the fair’s coordinator.

“Miss Smith has done a wonderful job of coordinating this event,” Ramey said.

Smith said that she had been organizing this event since December 2011.  She initially sent invites to over 400 in and out of state companies.

FMU career fairs are held twice a year.  One is held in the spring semester, and the other in the fall.  According to Smith, the spring career fair is generally larger.

For more employment opportunities, students can attend the next career fair, which will be Oct. 24 in the upcoming fall semester, from 12 p.m. to 2:30 p.m.