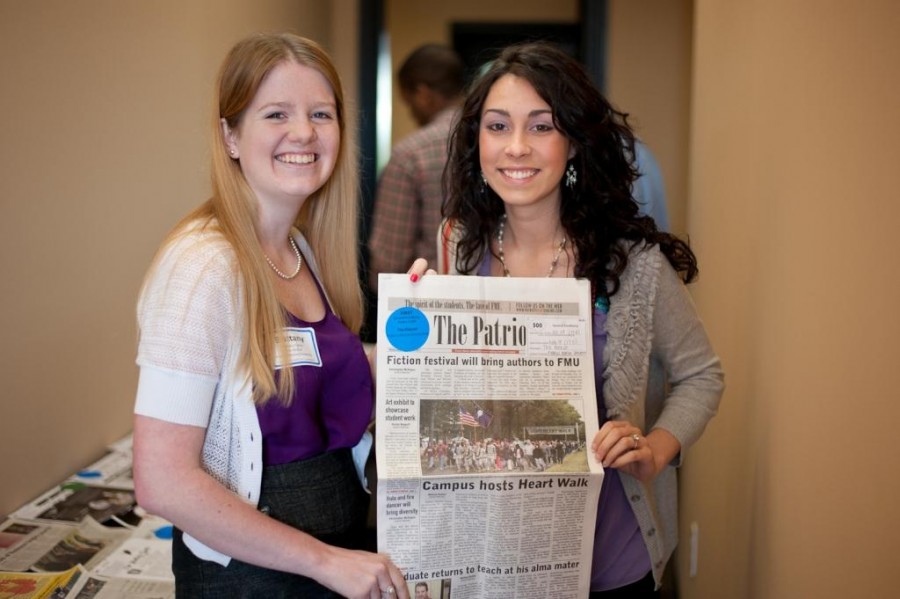 “The Patriot news staff should be very proud of their accomplishments,” Associate Professor of Mass Communication and Patriot adviser David Sacash said. “I have the highest respect for the news staff. This year’s editorial coverage was driven by Editor-in-Chief Brittany Parker and Managing Editor Staci Poston. Parker and Poston are professionals, and any news organization would benefit from their editorial experience.”

The staff took home five awards for first place, three awards for second place, five awards for third place, and one honorable mention. The SCPA annual competition consists of two divisions based on university enrollment: under 5,000 or over 5,000. The Patriot competed in the under 5,000 division due to FMU’s enrollment of 4,200 students.

Head Photographer Aaron Gotter, a senior majoring in Mass Communication, won two first place awards, one for the best photograph and one for the best sports photograph. He also received third place in both of those same categories.

“I am really thankful for the awards that I won at the press competition,” Gotter said. “It was my last year to compete, so winning two first place prizes was awesome. I’m also proud of our staff because we worked very hard to earn first place in our division.”

“I was so happy to hear news that the paper had won so many awards,” Sauls said. “It was very exciting to hear that I, personally, would receive three of them. I’m really proud of this staff and the product that we now produce. We’ve come so far in the past two years and learned so much from each other. It’s nice to know that we’ve created the number one collegiate paper in our rank.”

First place in the feature story category went to Rachel Baggett, a staff writer and advertising manager at The Patriot, for a story she wrote about Francis Marion University graduate Natalie Mahaffey’s return to FMU as an English instructor.

“It was an honor and very unexpected, which made it that much more exciting,” Baggett said. “I’m also glad that the awarded article was for a Professor Spotlight because those are the ones I really enjoy writing. Many of the professors here have such interesting backgrounds that the students would otherwise never know about.”

Editorial cartoonist David Doughty, the third staff member to place twice in the same category, won second and third place for best humorous illustration or cartoon, the category that he received second place for during last year’s SCPA awards ceremony.

“Some of his cartoons have been controversial, and some students don’t think his work should have been published,” Sacash said. “What some students fail to realize is that the student newspaper is not a public relations publication for any organization. Mr. Doughty has had my full support, the support of the editors, and he is a very talented editorial cartoonist.”

Sports Writer Tim Laurent, a junior majoring in Mass Communication, took home third place in the Sports Story category for his coverage of an FMU baseball game victory in which one Patriot player pitched a no-hitter.

Former staff writer Christopher McKagen, who graduated in December 2011, received the final third place award for The Patriot. He placed in the News Story category for a story he wrote covering the arrests of current and former FMU students in connection to allegations of fraternity hazing. McKagen currently works at the Morning News, a local Media General newspaper in Florence, and he will soon take over as the new editor of the Hemingway Weekly Observer.

Staff Writer Jonathan Rainey, a junior majoring in English, earned an honorable mention in the Arts and Entertainment Story category for his review of the J. Edgar movie. The Patriot regularly publishes Rainey’s movie and book reviews.

Since 2007, The Patriot has won 29 awards in head-to-head competition with other college newspapers in South Carolina. Parker and Poston have held leadership roles at the newspaper for the last two years.

“They are great editors and set high standards for the student reporters,” Sacash said. “They have both worked hard to improve the editorial quality of The Patriot.”

Parker, Poston and Gotter will all graduate in May, but Sauls will return to FMU for his last semester in the fall.

“Darby Sauls has been a key member of the editorial team and will take on additional management responsibilities next school year,” Sacash said. “Assistant Editor Veronica Stark, who will succeed Parker as the editor-in-chief of the newspaper next year, will be working closely with him to continue publishing a high-quality student newspaper.”