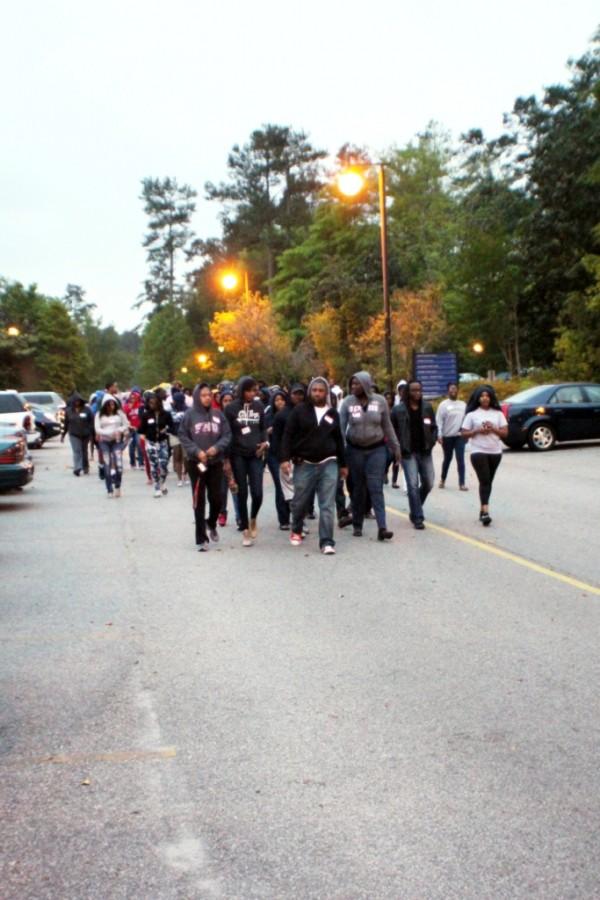 Strong winds and reports of severe thunderstorms did not stop a gathering of students from marching a mile on campus in memory of the slain Florida teenager, Trayvon Martin, on  April 9.

Martin, wearing a gray hoodie, jeans and white sneakers, only had a small amount of cash, Skittles and an iced tea in his possession. Because Florida has a “Stand Your Ground” law, Zimmerman had not been arrested right away because he claimed he shot Martin in self defense. The case has caused a major uproar across the country, ultimately bringing the march to the FMU campus.

The FMU chapter of NAACP, the Delta Sigma Theta sorority and College Democrats banded together and planned the march in order to bring awareness of the controversial case to the students on campus.

“It was the first march of its kind on campus, and we just wanted to set the tone for others to do something like it again,” Moore said.

President of Delta Sigma Theta sorority, LeAndra Keller, senior mass communication major, also said that she found the event to be a success, and she enjoyed seeing all of the organizations come together for a positive cause.

“I think it was a very positive event,” Keller said. “We had a goal, and we made that happen. I would like to see this happen again.”

Senior political science major, Mike Glymph, president of College Democrats, thought the march had a great turnout and hopes to see students marching for justice in the future.

“I would like to see something like this happen again on campus because I like to see different organizations come together for a good cause,” Glymph said.

Students from several organizations marched together.

“This is the first time something of this magnitude has been done on campus, and I’m just grateful to say that I was a part of it and stood for justice,” Stephanie Michael, senior mass communication major, said.

Other students believed that the march was similar to the actual night that Martin was killed, as it was raining outside.

“The march was a great idea and it’s crazy that it started raining because it creates a parallel with the actual situation,” Lashonda Riley, freshman psychology major, said.

Clarissa Chestnut, junior political science major, had a different perspective on what the weather meant during the march.

“I feel like there is a parallel between when they used to march back in the day,” Chestnut said. “The weather in general represents the hardships that people endured during the marches so we’re kind of experiencing the same thing.”

Junior mass communication major Shacovia Fulton also said that the march bought awareness to those who did not know about what happened to Trayvon Martin.

“I think (the march) was awesome,” Fulton said. “It was a very historic moment.”

Many participants enjoyed seeing the various organizations come together and march for the cause, bringing several types of students together.

“It’s good to see the different organizations come together for such a meaningful event,” Destiny Floyd, freshman biology major, said.

Student body president, Cody Simpson, junior political science major, marched with the group as well, and he said that it was dear to his heart to see all of the organizations come together.

“It’s a message that needs to be sent,” Simpson said. “I think it’s amazing to see that the good people from FMU are doing something like this. It’s the unified effort that we’ve been preaching about all year. When we do something, we stand together.”