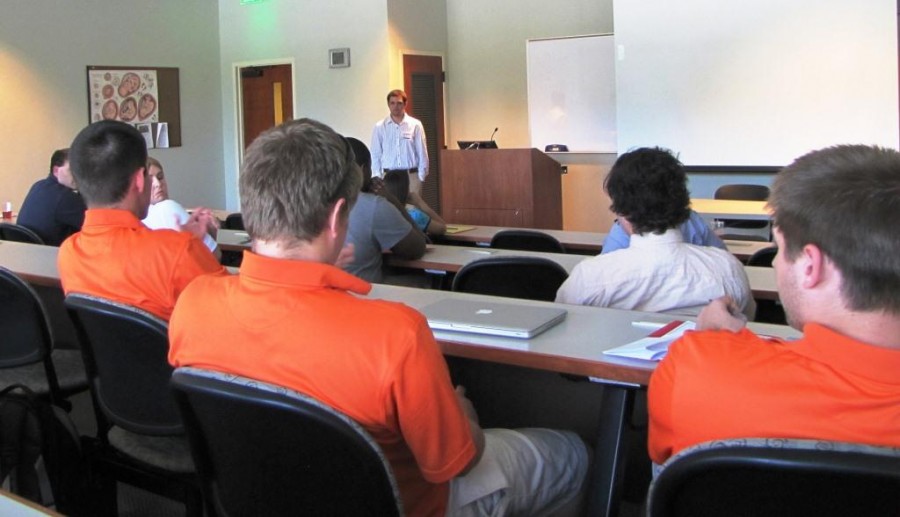 The Department of Mathematics, in conjunction with the National Science Foundation, held the 2012 Francis Marion Undergraduate Mathematics Conference on Friday, March 30, on the FMU campus during which fifteen students from FMU and Clemson University presented research projects pertaining to mathematics.

Assistant Professor of Mathematics Dr. Nicholas Newman explained the goal of the conference.

“This annual conference, now in its eighth year, aims to encourage undergraduates to present and enjoy pure and applied mathematics,” Newman said. “The conference provides an excellent opportunity for undergraduates in the region to interact with other students and experience mathematics through presentations of their work, attendance in other presentations, and discussions with their colleagues.”

Senior FMU student Joey Nettles, who is double-majoring in computational physics and mathematics, gave a presentation titled “Mathematics in Physics,” in which he combined ideas from both of his areas of study.

“Presenting on the topic of mathematics in physics was a great reminder of why I love to study these fields,” Nettles said.

Nettles said that he enjoyed demonstrating how mathematics can be used to make complex things like quantum mechanics easier to understand.

“I tried to think of a topic in mathematics that I felt people needed to hear, so I decided to talk about various uses of mathematics in physics,” Nettles said.  “I chose this topic because it showed how topics in mathematics that were once purely abstract and theoretical are now used to model the physical world.”

Joseph Conner, a senior at FMU double-majoring in health physics and mathematics, also presented at the conference.

Conner said that he prepared by researching a topic with which he already had some interest and understanding:  Euclidean geometry.

“I was introduced to Euclidean construction my freshman year, and I have worked at it off and on as a hobby since then,” Conner said.  “The Greek approach to geometry is very interesting and very different than the modern approach.  I believe it is useful to understand the foundations of our mathematics, and Euclidean geometry is one of the cornerstones on which our understanding of the world rests.”

Conner said that his favorite part of the conference was the keynote address.

Dr. Chris Rodger of Auburn University gave the keynote address on “Discrete Mathematics Today,” in which he discussed some modern applications of mathematics.

“I liked the keynote,” Conner said.  “I’m presently taking Discrete Mathematics with Dr. Ramey, and it was interesting to see applications of that.”

Conner’s presentation was selected as the best in his session.  Troyer and Moffitt received the honor of being selected from the other session.

The conference was open to all students, with the focus on undergraduates from South Carolina and neighboring states.