Christopher Johnson is a Distinguished Professor 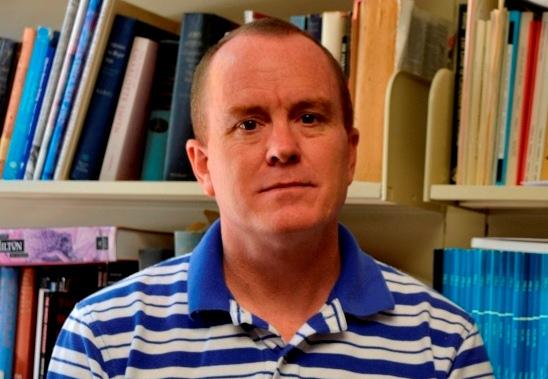 Christopher Dyer Johnson, the chair of English, Modern Languages and Philosophy, was named the 2011-2012 J. Lorin Mason Distinguished Professor in the spring.

“I was really surprised,” Johnson said. “I was very grateful and very humbled by the award.”

Johnson was presented the award at the spring commencement on Saturday, May 5.  It includes a cash prize, a gold medallion to be worn at graduation and automatic nomination for the Governor’s Professor of the Year Award next fall.

The Lorin Mason Distinguished Professor award is named after a former chairman of FMU’s Board of Trustees.  It is the highest honor given to a faculty member and has been given since the 1975-1976 school year.  There is a nominating committee of faculty, students, and former awardees. The award is based on a faculty member’s contributions to teaching, professional service, and scholarly activities.

Johnson is starting his 17 year as a professor at FMU. He received his Bachelor of Arts degree from Villanova University; he earned his Master of Arts and doctorate in English at the University of Delaware. Johnson began teaching at FMU in 1996 as the chair of English, Modern Languages and Philosophy. Previously, he worked atMissouriValleyCollegeas the dean of arts and humanities.  Johnson didn’t like the idea of working at a larger research university, so he was drawn to FMU.

“Francis Marion is a rewarding and enjoyable place to work because the people here are terrific,” Johnson said. “Our campus culture is one where we don’t have the kinds of divisions between faculty and staff that exists in other places.”

“As one of FMU’s most prolific professors, Chris is widely recognized as an extraordinary teacher and researcher for the past 16 years, his students have held him in high regard as a caring and compassionate teacher and advisor, and his colleagues have respected his scholarship and leadership. He is richly deserving of this recognition.”

Johnson thanked his success to classroom observation as well has his fellow colleagues.

“The commitment to the institution and the profession that I’ve seen in my colleagues has really encouraged me to stay engaged in a lot of ways. Whatever success I’ve had has been a product of this institution. They’ve encouraged me to be a better professor.”

Johnson has taught a wide variety of courses in his career, including English Composition, British Literature Before 1785, Shakespeare, and English Neoclassicism.  He is a member of the S.C. State Employee Grievance Committee, vice president of the Southeastern American Society for Eighteenth-Century Studies, and President of the S.C. Association of English Departments.  He believes his students played a big role in his success as well.

“I like the students at FMU the best of any place I’ve taught.” Johnson said. “They tend to take their education seriously. They’re appreciative of opportunities at the university and they take advantage of them.”

Johnson said his favorite part of teaching is seeing the students develop over the years.

“The things I think all teachers like to see are the students who start to understand things that they didn’t understand before,” Johnson said. “We can see them start to develop understandings and ideas that are more sophisticated. They’re better than when they started. Or when we can see students gain skills that we know will serve them very well in their future studies…and their careers.”