CYCLISTS CRUISE FOR A CURE: Hundreds of competitors race to raise money for Multiple Sclerosis 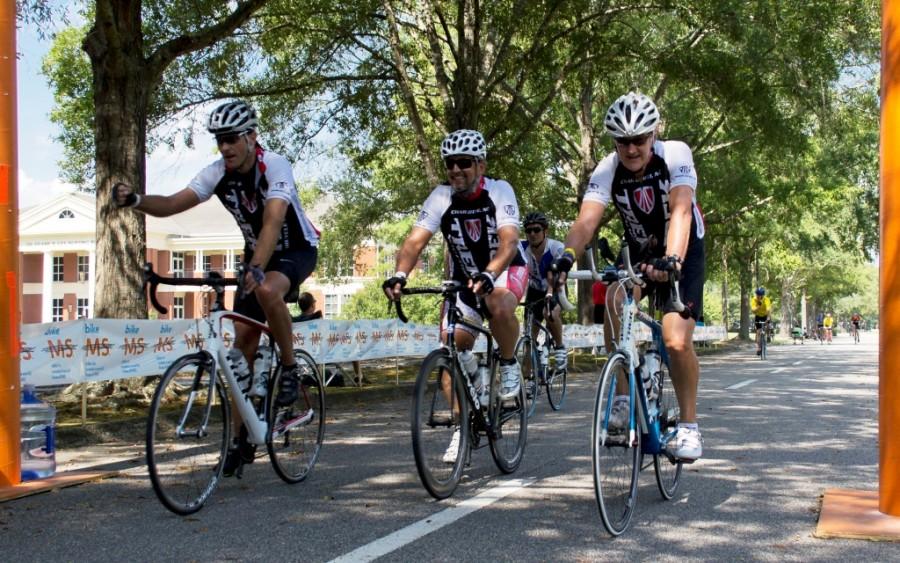 Almost 1,000 cyclists biked to FMU on Saturday, Sept. 22 as an overnight stop during Bike MS: Breakaway to the Beach, an annual bike marathon to raise money for the prevention of Multiple Sclerosis (MS).

Cyclists started from Monroe, NC on the morning of Sept. 22 with the goal of reaching FMU by evening, according to Suzanne Bland, Executive Vice President for the Mid-Atlantic Chapter of the National Multiple Sclerosis Society.  Bland said that FMU served as the midway point of the weekend.  Cyclists biked 100 miles on Saturday, from Monroe to Florence, and on Sunday they biked another 100 miles to the finish line at Sunset Beach, NC.

People and businesses from around Florence came to support the cyclists, and Bland highlighted how the tour helps bring the community together wherever it stops.

Combined, Bland said the goal for the cyclists and sponsors was to raise $900,000 from the event to be distributed to hospitals and research facilities for MS.

Riders started coming into FMU around 12:45 p.m. on Saturday afternoon and continued to trickle in for the remainder of the day. Tony and Jesse King, a father and son riding together, were tired from their 100 mile trek for the day.

They said that they were enjoying the barbeque provided by the university while they rested. Tony King also said why he joined the race along with his team from Atlantic Ingredients and Carolina Beverage.

“It’s a good cause and good team building, so that’s why we’re out here,” he said.

FMU, which has served as a stop on the Bike MS tour for three years, provided much of the volunteer help to make the weekend a success according to Bland.

“We couldn’t do it without Francis Marion,” Bland said. “Each department has a role. We’ve got volunteers from several of the clubs and the sports teams, and Darryl Bridges and Cathy Johnson are just amazing to work with.”

Staff, students and faculty all came out to help make the event a success. Nursing students were stationed in a tent to help the cyclists with any injuries they might have sustained during the ride. Sodexo, which provides the food service on campus, also came out to give food to the riders.

Rick McDermott, a sponsor for the Bank of America team, came down from Charlotte, NC to support his riders as they came through FMU.  He had a tent set up with refreshments for the cyclists. Having ridden in years past, McDermott knows how much fun the ride can be, but also how important it is.

“It’s great to ride and it’s fun, but the most important thing is raising money for MS,” McDermott said. “It’s great to get all the cyclists together to have fun but then also do something good at the same time.”