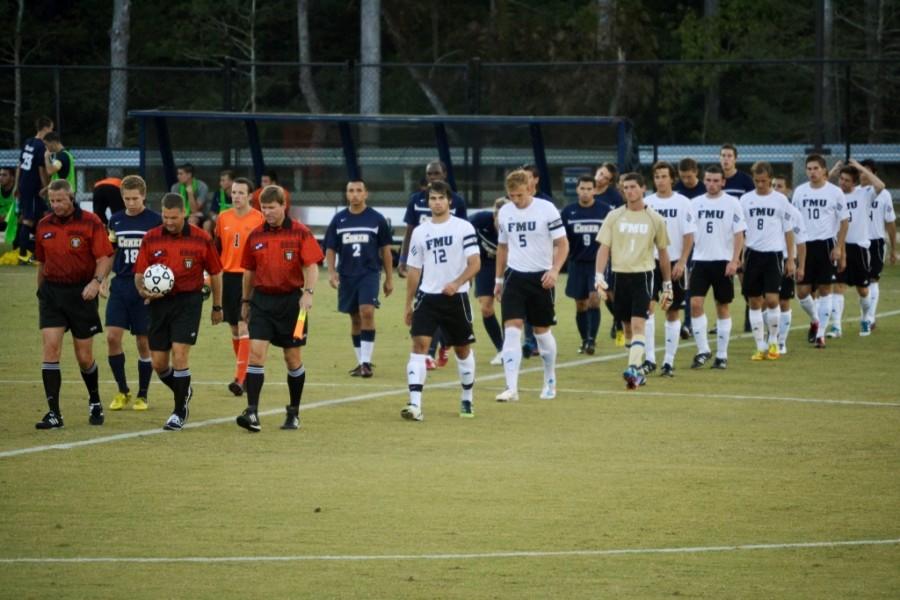 Competition always seems to heat up whenever the Patriots face local rival Coker College, regardless of the sport. A Wednesday, Sept. 26 non-conference men’s soccer match was no exception. Unfortunately for FMU, the Cobras came out on top thanks to senior Niko Tirkkonen’s match-winning goal with only 3:58 left in the second overtime period, giving the Cobras the 1-0 victory over the Patriots.

After a slow first half that gave way to only two shots on goal, both in the final three minutes, the match heated up in the second half. In the second stanza, the Patriots attempted 10 shots, four of which were forced saves by Coker goalkeeper James Sweeney. Other attempts went just off the mark. FMU junior forward Cody Farrier fired shots at Sweeney in the 65th and 71st minutes, was just wide of the left post in the 58th minute and was high on a shot from the top of the penalty area in the 73rd minute.

Former player and current fan Justin Walton expressed his thoughts after the first half.

“The guys’ effort is there, they just have to capitalize,” Walton said. “They look good out there and they are hanging tough with a pretty tough Coker team. There are a lot of younger and newer players out there. If they just relax and keep up the effort maybe some balls will bounce our way. Hopefully we can land some goals in the second period.”

The Patriots were pressured into a man down defense for the final nine minutes of regulation and the overtime sessions following freshman midfielder Pascal Magiera’s second yellow card on a tackle at midfield. To the dismay of the crowd, FMU freshman Robin Schittenhelm attempted a shot from 25 yards out that landed just inches above the crossbar. Schittenhelm’s shot was one of many blown opportunities for the young Patriots in the match.

The match-deciding score came in the second overtime less than a minute after Coker’s Alan Cuevas stopped an FMU transition break with a foul near midfield that drew another yellow card.

FMU men’s soccer head coach John Campbell liked his team’s effort but said that capitalizing on a few opportunities could have shifted the outcome.

“We had a number of chances to finish around the goal,” Campbell said. “We have to be more patient with the ball. It was a big game against a rival in Coker who was ranked as high as seventh. We have to take goals and capitalize on them.”

Coker improved to 5-2-0 with its fourth consecutive road win. After the match, Francis Marion (2-5-0) returned its attention to Peach Belt Conference play.

What might have hurt most for the Patriots was the fact that they lost to one of their biggest rivals in Coker. The fan base was supportive and the effort was there but FMU just came up a little short.

Meanwhile, Campbell plans to prepare FMU for upcoming matches and encourage the squad to keep up the effort and confidence for the rest of the season.

The head coach did not deny, however, that this loss was a tough pill to swallow.

“It was difficult,” Campbell said. “We have a young team and the guys are doing the right things but things don’t always go the right way. It gets frustrating for the guys but they must keep putting effort in and things will get better. We have a big game coming up at North Georgia. I just tell the guys to keep their heads up and move forward. Things will start to go our way. As much as the Coker loss hurts, we must move on and get the more important conference victory.”