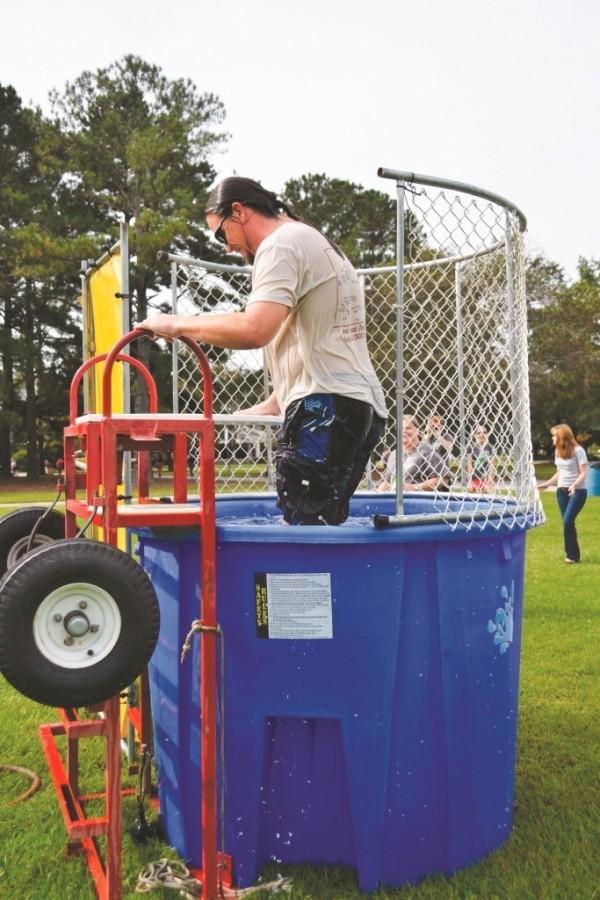 For the second year in a row, FMU student group Alive in Christ (AIC) teamed up with university professors to raise money for a local charity organization.

President of AIC, Lauren Cole, a senior biology major said that the group did not have to do much convincing to get the teachers in the tank.

“The professors are always really excited about the dunk booth,” Cole said. “[They] gladly volunteer.”

AIC took the willing teachers and put them in a dunk tank, offering students three balls for $1. Two FMU baseball players, Rhodes Dickerson, a senior education major, and Shaefer Shepard, a secondary education-math major, were interested when they saw the dunk tank on the lawn, especially because one of them knew the teacher in the tank.

“[Shannon] was talking junk to me as I was walking by,” Dickerson said. “I had to stop and dunk him.”

Both men stepped up to the line to throw their balls at the target. They both hit it, and Dickerson ended up dunking Shannon twice.

Another student who took aim at the professors was senior Tia Fulmore, double major in French and Theater.

All the proceeds went to The Naomi Project. This organization located in Florence gives long-term shelter to women and children that are affected by domestic abuse. Traditional shelters can often only provide a place for 30-60 days, even though they have nowhere to go after that time period. The Naomi Project also offers education and training to those seeking shelter, helping them to become independent and heal from the emotional and physical pain that they had endured.

Cole said that the group was deliberate in choosing to do a fundraiser like the Dunk-A-Palooza. She said that it got both teachers and students involved, unlike a traditional fundraiser where it would be mostly students participating.

“We want to get everyone involved,” Cole said. “It’s not just about our group; it’s more about the organization we’re sponsoring. We wanted to get faculty involved and just have fun.”

Free pizza and drinks were available starting at noon until the supply ran out. By the end of the event, AIC had raised $250 for The Naomi Project.