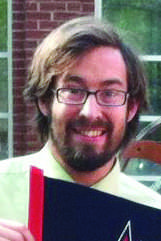 Coté decided that a career in admissions was something that he was interested in pursuing while working in the Admissions Office at FMU after he graduated.

Coté worked for the FMU Admissions Office for four and a half years before he accepted the job at Western Carolina University. Coté worked as a senior admissions councilor at FMU.

“During my time in the FMU Admissions Office, I gained a lot of experience and knowledge that I can use in my job today,” Coté said.

Lauren Stanton, an admissions councilor at FMU who worked closely with Coté during his time in the FMU admissions office, described him as spontaneous and approachable. She said that he made work enjoyable for every one around him and was always helpful.

“Not only did he create an enjoyable work environment, but his willingness and eagerness to always help others was an admirable quality that should be emulated by all,” Stanton said.

Coté graduated from FMU in December 2006 with a Bachelor of Arts degree in history. He minored in philosophy and religious studies.

During his time as a student at FMU, Coté said that he found it important to get involved around the campus and take part in extracurricular activities, such as intramural soccer. He also worked as a resident assistant and an orientation leader.

Coté said that he enjoyed his time at FMU and met some great people while he was here. There are a lot of things about FMU that Coté said he misses, but most of all he misses the people that he met.

“I enjoyed the sense of community on the FMU campus between the faculty, staff, and students,” Coté said.

Coté offered some advice to current students at FMU. He said that students need to go to class every day and pay attention while in class. He also said that when students leave the classroom they should go out and try to get some out of class experience by doing things such as getting an internship, studying abroad or joining a club or organization at FMU.