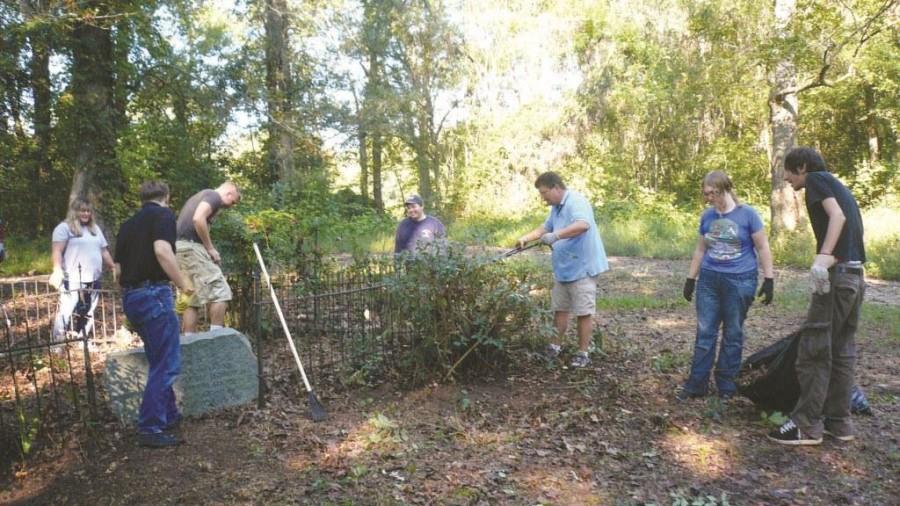 Kolb served under Brigadier General Francis Marion during the American Revolution with distinction. Beginning his service as a Captain in Sept. of 1775, Kolb quickly gained recognition for his leadership ability as he led raids and ambushes against British and loyalist soldiers. By 1780, Kolb reached the rank of Colonel and had served under Maj. General Nathaniel Greene in addition to Brig. General Marion.

A historical marker on Highway 15 near Society Hill, SC marks the gravesite and tells about the events surrounding Colonel Kolb’s death.

“A band of Tory raiders, on the night of April 27-28, 1781, surrounded the home of Colonel Kolb and his family,” the sign reads. “He was shot while surrendering himself as a prisoner of war and his home was burned. His grave is in old Welsh Neck cemetery, one mile north, a short distance from his home site.”

Ten Phi Alpha Theta members, including professors and alumni, went to the gravesite with gardening equipment to clean the area around the gravesite. Students and professors went to work picking up litter, trimming back bushes, raking leaves and pulling weeds. According to Phillip Huber, President of Phi Alpha Theta and a senior history major at FMU, the site was unkempt and needed cleaning.

“It was a pretty big mess with a lot of overgrowth,” Huber said. “We cut back the overgrowth and picked up all the cans. We even cleaned up the tombstone itself and the fence surrounding it.”

Phi Alpha Theta members repainted the iron fence around the grave to keep the rust at bay in addition to cleaning the headstone itself with soap and water.

The project came to the attention of Phi Alpha Theta via the fraternity’s adviser, Dr. Kennedy, who is also a professor of history at FMU.

“Dr. Kennedy had recently gone down there over the summer to check it out,” Huber said. “He saw what kind of horrible shape it was in and heard it had been since the 1970s since anyone had worked with it.”

Phi Alpha Theta has plans to host other projects similar to this in the future, but for the month of October, there will be another installment of the history lecture series on Wednesday, Oct. 17 featuring Sherrie Moore, the Regional Director of National History Day. In addition, the annual Renaissance Festival trip happens on Saturday, Oct. 27. There is a sign-up sheet in the History Lounge located on the second floor of Founders Hall.