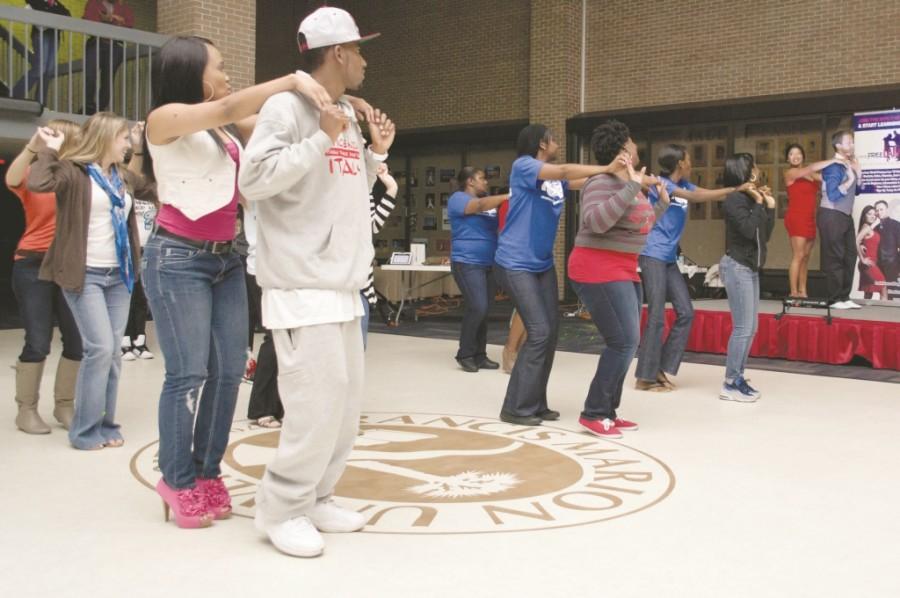 Over 50 students showed off their Latin dance moves during the Salsa Magic event in the University Center on Wednesday, Oct. 10 from 7 to 9 p.m.

Lee said he enjoys teaching Salsa because it allows other people to see cultural diversity.

“My favorite part about doing this is having the opportunity to spread cultural diversity, traveling and doing what I love,” Lee said.

Students from various classifications attended the event. Some of them had never experienced the Latin culture until they stepped out on the dance floor. While the instructors were teaching the dance steps, they were also teaching students about the cultural history in America and the importance of diversity.

Freshman education major Kristina Chandler had never been to a UPB event before. Chandler learned about the Latin culture as well as the dance moves.

“This is my first UPB event that I’ve ever gone too,” Chandler said. “I’ve never been to anything like this before. It kind of makes you break out of your comfort zone in a good way.”

Senior biology major and UPB member Yanna Jones said she thought Salsa dancing is very dynamic and compared it to a form of exercise.

“This is a fun activity that is vigorous,” Jones said. “You can exercise while having fun.”

After students learned the dance steps, couples chose to compete in the Salsa competition in order to win tickets to the largest Bachata festival during August 2013 in Washington D.C.  Before the couples competed, Lee would ask the contestants about their cultural backgrounds.

“I ask them about their backgrounds because I want people to know that they are surrounded by cultural diversity on campus,” Lee said.

After every round, the audience helped the instructors Lee and Kat decide on the winners.

Lee announced the winners as a tie between two couples. The couples were senior Kristen Dickerson with freshman Ladarren Landrum and junior Anche Bell with junior Shanay Felder.

“I’ve been coming to UPB events for years and I’ve never won,” Dickerson said. “This time, I won! It was a great experience, and I am interested in learning more Latin dances.”

Salsa Magic was created 10 years ago because Lee wanted to show people that learning about diversity can be fun.

“In George Mason University, we had some cultural diversity shows coming in that were boring,” Lee said. “I wanted to create one that was entertaining and interactive.”

During the past 10 years, Salsa Magic has been to over 550 campuses, more than 650 cities worldwide and taught over 130,000 students. The group has done tours in Europe and Asia. In 2013, the Salsa Magic crew is planning on doing another tour in Australia and Asia.