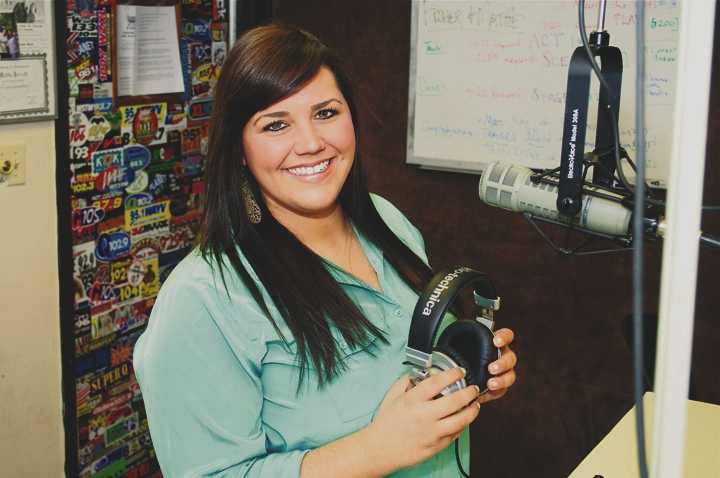 Anyone who listens to the popular Florence radio station 103X on Saturday nights will hear the voice of Francis Marion University alumni Ayers Manos. Her radio show, called “Ayers on the Air,” is on 103.3 FM, Saturday evenings and Sunday afternoons from 1 p.m. to 6 p.m. Her other radio personality, known as “Lee Cooper,” is on Eagle 92.9, Monday through Friday from 2 a.m. to 6 a.m.

Manos graduated from Eastside High School in Taylors, SC near Greenville and moved to Florence to attend FMU. She graduated in December of 2010 with a Bachelor of Arts Degree in Mass Communications: Broadcast Journalism and a minor in Theater.

During her time at FMU, Manos came to the realization of what she wanted to do after graduation.

“I took this broadcast journalism class with Maria Lundberg,” Manos said. “It was a video class where you actually got in front of the camera, and it was the one class I’d been waiting for because I’d always wanted to talk in front of a camera since I wanted to be a meteorologist when I was a kid. So, when I was in that class and I had to say my lines, I would watch myself back and I realized that this isn’t for me. One of my eyes would twitch every time I got on camera; I thought I looked awful!

This was the point when Manos reconsidered her career choices and thought about different outlets for her skills and interests.

“I realized that I needed something that involved music which I love and that I could talk without being on camera,” Manos said. “Then radio hit me. That’s what made me pick my path.”

Manos began interning at Qantum Communications in Florence in January 2011. She started out in the sales department but quickly moved to the broadcast area. A regular part-time employee at Qantum quit on the day that Manos’ internship ended in May 2011, which left a position open for Manos to start her career in the radio business.

At first, Manos helped on Wednesday nights with board operation, which involves controlling the music, commercials, and anything else to do with what listeners hear over the radio. She would also operate the systems when the DJs were conducting on-location broadcasting in the community, called remote operating, for Eagle 92.9, the Flo, or 103X.

Manos, however, wanted to talk on the air every day. She spoke to her bosses and soon started doing commercials. Manos said the first commercial she ever recorded was a pig picking commercial for a local church.

Finally, Manos was offered an overnight shift on 103X from midnight to 6 a.m. where she talked between music breaks.  Manos said her boss would do regular “aircheck meetings.”

“It’s the scariest situation ever,” Manos said. “You may think you did well, and didn’t; it’s almost like an American Idol competition. He would tell me later if I did well or not.”

Manos said that her boss thought her voice was too “sexy” and that she needed to talk more “normal.”

“I got better over time,” Manos said with a laugh. “And as time went on, an opportunity came up.”

Instead of recording overnight shows, Manos was offered the job of recording the Saturday night show on 103X, a popular time for radio and a big opportunity, as well as the Sunday afternoon show. She also asked for a position on Eagle 92.9, where she received the early morning spot for Monday through Friday as “Lee Cooper” in earlier this year.

“I wanted to be “Dusty Nights” but my boss wouldn’t let me,” Manos said. “No one hears me but truckers. I guess they like my voice!”

Manos’ career is climbing steadily. She recently received information from her boss of a big opportunity that could skyrocket her career as a radio personality. In addition to her work at Qantum, Manos also works at Barnes and Noble as a barista.

“I’d like to one day create my own station,” Manos said. “It could be in the same company I’m in now or somewhere else, but it would be music I know people would enjoy; something that would be interesting and good, something that gets your soul feeling good. I just think people are catching popular music too late.”

Some of Manos’ favorite artists include Incubus, Grizzly Bear, Toro y Moi, Yuna, and “pretty much anything from Dave Matthews to Sade to Miike Snow to Saint Germain.”

Within the next ten years, Manos sees herself leaving South Carolina.

“Hopefully I’ll be working at Sirius XM with my own station.” Manos said. She recently created a Facebook page called “Ayers on the Air” and is currently busy promoting her page. Manos said she looks forward to what her future in radio has in store for her.