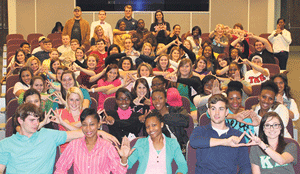 In order to raise awareness for the Greek community in 2013, Greek Council resolved to increase its involvement on and off campus

Dustin James, Greek Council President and junior biology major with an emphasis in medical technology, said he plans on making this New Year’s resolution follow through by hosting two “Greek discussions” this semester.

“All members of the fraternities and sororities are asked to come to this,” James said.  “This is something we have not done before, and I really look forward to working with everyone to help Greeks move forward.”

He commented that although the Greek life participates in many organizations on campus, he would like to improve the involvement of Greeks in other events like they did in the past.

“Greek Council looks to work with all organizations on campus consisting of Greeks and non-Greeks alike to bring back the Patriot spirit and involvement that FMU faculty, staff and students once portrayed, James said.

James said he enjoys being the president of Greek Council and he appreciates when Greeks from all different organizations come together for the same purpose.

“My favorite thing about Greek Council is coming together for a common purpose, which is to help Greek Life grow,” James said. “Though we all have our own respective brothers or sisters in our own individual organizations, Greek Council shows that we are much more than that.”

Alpha Delta Pi member sophomore and mass communication major Nicole Guest participates with Greek Council and said it is indispensable for everyone to work together.

“I feel that we all have similar goals in mind, and it’s important for us to interact with each other,” Guest said. “It’s essential for organizations on campus to come together to help the community and the school itself.”

“Greeks together are a family, and I personally want to thank each and every one of you who prove your dedication and appreciation by all that you do for your organizations as well as the Greek Council,” James said.

Other officers in the Greek Council are Vice President Morgan Yarborough, Secretary Jasmine Bennett and Sergeant At Arms Rafael Douglas, Jr. They meet two times a month in the Smith University Center to discuss information of the individual organizations. James said they work on bettering the Greek system and learning ways to become more involved on campus.

Greek Council first started at Francis Marion College as “Greek Association.” It returned to FMU in 2008 as Greek Council.