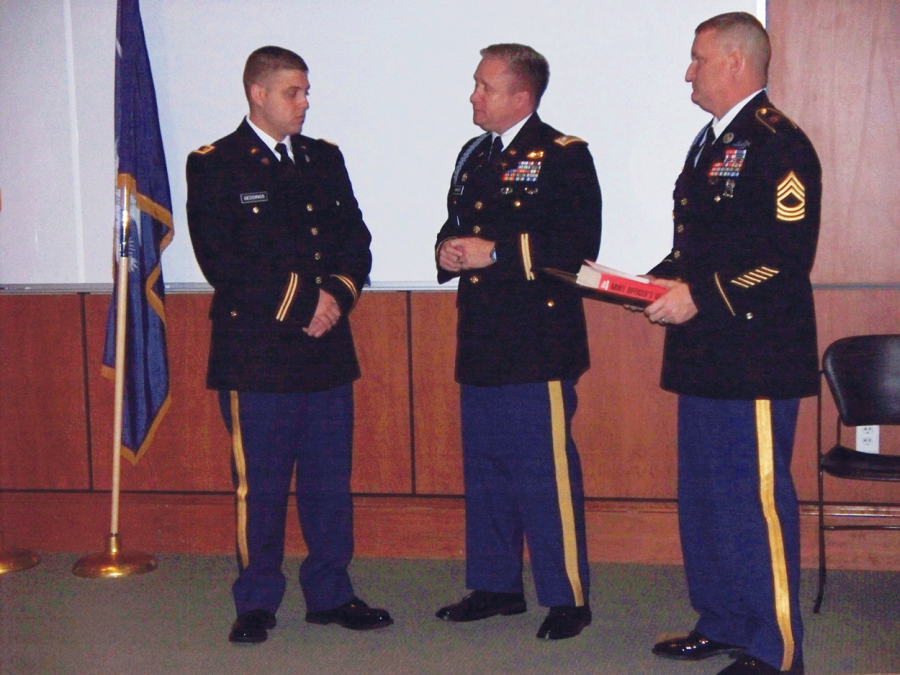 Thomas W. Geddings V, a graduating senior, was commissioned into the army and became a 2nd Lieutenant on Friday, Dec. 14 in the Thomason Auditorium of the Lee Nursing Building.

Geddings, who has been involved with the ROTC program for many years, said he has always had a special connection to the military because his father is a serviceman.

“I have been in an ROTC program since freshman year in high school, eight years strong,” Geddings said. “Growing up and seeing my father go to work early and defend my freedom, I had no other dream than to make him proud and take my specific set of skills into the military.”

The guest speaker for the ceremony was FMU President Fred Carter, who is a retired colonel from the United States Marine Corp Reserve.

Carter spoke about his experiences as a soldier and shared the things he had learned since his own commissioning ceremony, which took place more than 40 years ago.

“In all the hours of instruction, we’re taught tactics and we’re taught strategy,” Carter said. “I don’t know that anyone ever teaches us that when we pin on those gold bars we become psychiatrists, social workers and financial managers because the troops entrusted to us don’t know those boundaries. They see you as their officer and sometimes there is no place else to go.”

After Carter’s speech, Geddings led the recitation of the Soldier’s Creed. The creed is a soldier’s promise that they will serve the United States and keep themselves, as well as their equipment, in great condition.

A few lines of the creed include the statement “I am an American Soldier, I will never accept defeat and I am a guardian of freedom and the American way of life”.

Geddings’ girlfriend, Allison Davis, a sophomore and education major, was in attendance at the ceremony. Davis said that she and Geddings met in ROTC her freshman year and she was happy to be with him at his commissioning.

“The ceremony meant a lot to me; the students in the ROTC are truly are amazing,” Davis said. “It is not for everyone, but Thomas has truly put in a lot of work for the program.”

Since 9-11, many troops have been deployed around the world. Davis said that although she knows being in the military is not the safest career choice, she knows that Geddings will do it well.

“It makes me extremely happy to know that Thomas has accomplished one of his lifelong goals,” Davis said. “It is difficult however, to know that his goal is to protect our country. I love Thomas, and I know that wherever he goes and whatever he does, he will do it wholeheartedly.”

While at FMU, Geddings majored in psychology. He graduated Dec. 15, the day after his commissioning. He will serve with the Headquarters and Headquarters Detachment of the 812th Transportation Battalion in Charlotte, North Carolina.

“Being at the end [of my undergraduate journey], it is definitely a humbling experience and I am still a little shocked that it went by as fast as it did,” Geddings said. “Embarking on my new path I know God will guide me, and I have my head high as I know I’ll be able to continue to make my family proud.”