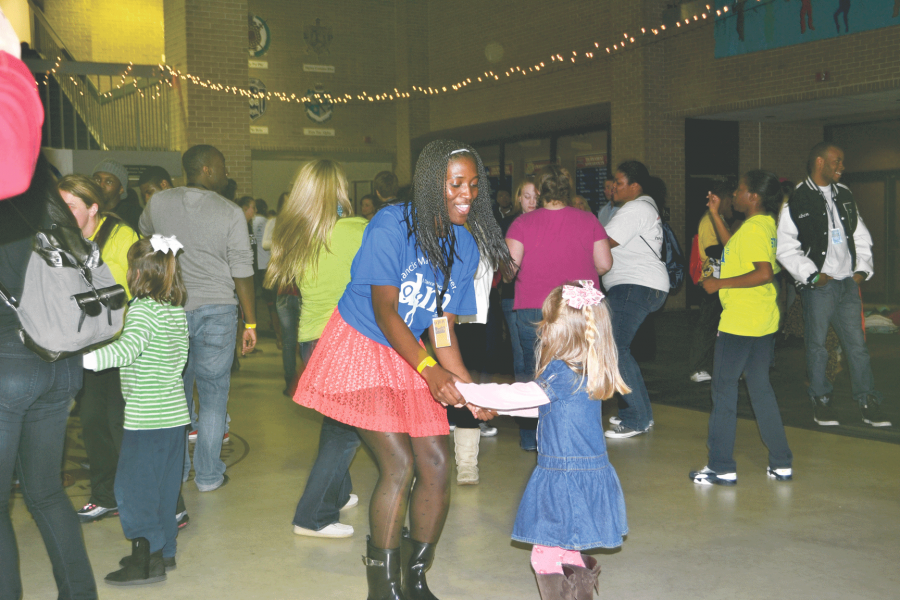 For the first time in FMU history, the University Commons (UC) opened the dance floor to the Dance Marathon event on Thursday, Jan. 25 from 8 p.m. to 8 a.m. the following day in order to raise funds for sick children at McLeod Hospital.

Four kids attended the event early on.  They experienced the superhero room, which was decorated with different posters of superheroes, Spiderman and Batman inflatable decorations and craft tables for superhero mask making.

Many of the decorations such as the comic book posters and inflatables were provided by Legend Comics store owner Mr. Denny.  He brought the kids comic books and dressed up as Batman and the Joker.

According to FMU Dance Marathon Co Director and Housing Intern Andre Culbreath, the kids were excitedly running all over the UC.  He explained that the family members of the children were also partaking in the activities.

He added that the families of children at hospitals are often left out of the equation of how difficult it is to deal with a sick child in the family.

Eli Larsen, director of operations for the marathon, commented on her favorite part of the event.

“My favorite part was has probably been helping the kid’s room and being able to get that cake and getting to see the smiles on the kids and parents faces,” Larsen said. “Also, the good thing was I got to work with the snow cone machine and the cotton candy machine.”

Senior mass communication major Abigail Roper, who also served as the marathon’s director, hopes that the marathon will become an FMU tradition.

As a result of some staff members warming up a boxed pizza in the oven, smoke filled the kitchen area and set off the fire alarm. According to Patrolman First Class Elmore, no one was in danger.

“Everything was vented out,” Elmore said. “No fire.”

After the fire alarms cut off, students resumed dancing to the music provided by DJ Ronnie. The students later participated in a riot dance party in which they were given glow sticks.

Money is still being raised for Dance Marathon. The marathon is now a part of the division of Student Affairs.