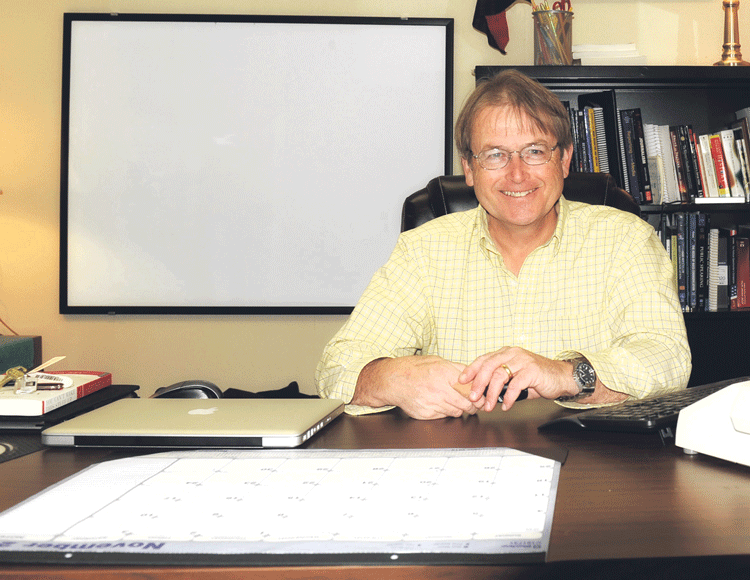 Hanson assumed the position last year after Professor Don Stewart became ill, and continued after Stewart passed away. He was officially named Chair of the department in July.

Hanson, who has had more than 20 years of experience in the field of journalism, earned his Bachelor of Arts degree in Journalism from Eastern Washington University.

After graduating, he joined the navy where he spent four years in the Philippines. After serving in the Navy, he worked as the bureau chief for the Philippines’ “Pacific Stars and Stripes.”

He then became managing editor of “The Readers Digest” (Asian edition) in Hong Kong, China. He remained there for three years until he moved to New Dehli, India to work for UPI. Hanson covered multiple stories including the Tamil revolt in Sri Lanka and the Pro-Democracy Movement in Nepal.

After working in India, he took a job as the Pacific Editor in Tokyo, Japan for the “Stars and Stripes.”

Hanson decided to return to the United States in 1994.

He accepted a teaching fellowship at the University of Montana’s School of Journalism, located in Missoula, where he earned his master’s degree in journalism.

Hanson joined the FMU staff in 1996 as a mass communication professor.

As chair of the Department of Mass Communication, Hanson has many administrative duties. He coordinates the mass communication program, plans classes and evaluates the faculty.

Hanson commented on his duties as chairman.

“I haven’t been a chairman before, but I’ve ran bureaus and administrative duties tend to be fairly similar,” Hanson said.

Senior mass communication – public relations major Haley Sims said that she thinks that Hanson makes a great chair for the department. She said he is always willing to go the extra mile for his students.

“He cares not only about teaching his students, but also about seeing each one of them succeed in every aspect of their lives and future careers,” Sims said.

Senior Lillian Miller, who double majors in history and mass communication – broadcast has had Hanson as a professor and also believes he is a great choice for the position because of the way he interacts with his students.

“He is the type of professor that listens to you and will help you in any way that he can,” Miller said.