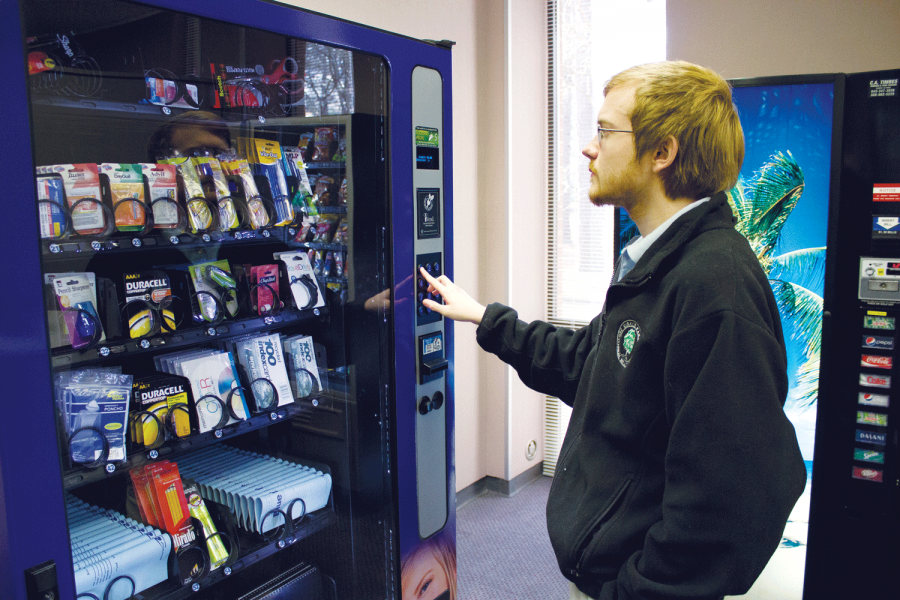 James A. Rodgers Library patrons can now buy snacks, drinks and even office supplies without leaving the building and interrupting their studies, thanks to a recent investment in three new vending machines and a change in the library’s policy on food.

According to Dean of Library and Professor Joyce Durant, the machines are a valuable addition to the facility.

“The vending machines get a lot of use by the students,” Durant said. “The guy from the company has to come by often to restock.”

“Now, I do not have to completely stop working and walk all the way to another building just to get something to drink,” Leyers said.

Along with the addition of the vending machines, the library has also experienced a change in the food and drink policy.  Durant explained that the addition of the machines increased the possibility of damage to library collections and equipment. However due to the amount of responsibility she has witnessed from the students, it was finally decided that the no food or drink rule would be relaxed.

“We are allowing students to have small snacks and drinks with closable tops,” Durant said. “However, students are not allowed to have meals or messy, aromatic foods like fried chicken or pizza.”

Though the policy has been relaxed, Durant made clear that there are still areas in the library where all food and drink is prohibited.  These areas include, but are not limited to, areas near the microfilm equipment, the Progress Energy Computer Lab, and the Arundel Room.  She went on to say that students can access the full food and drink policy on the library’s online website.

Nathan Flowers, head of public service and reference librarian, explained that in order to accommodate the new machines, a few changes had to be made to the downstairs area of the library.

“There were only about four computers in the Mac Lab,” Flowers said.  “So, we divided the room in half and added a partition.”

The result, Flowers added, was a smaller computer lab and a new lounge where students can utilize the vending machines or just take a break from studying. He explained that the staff wanted to make the library a more comfortable place for the students, especially since they spend a considerable amount of time in the building.

According to Durant, one of the more popular machines sells office supplies.  Regulated by the Patriot Bookstore, the idea for the machine was heavily based on the student population.  She described how groups would come into the library to complete projects and would often ask the staff to borrow supplies such as scissors or a stapler.  Such inquiries inspired the current supplies available for sale and will continue to do so.

“We do not want students to be afraid to come and ask us for something,” Durant said.  “If there is something you want that is not being sold, come to the circulation desk and tell us.  We will try to get it for you.”

Durant explained that the library was like home to a lot of people, a peaceful, comfortable place to get work done. That being said, she wants it to provide all the needs of the students and patrons.