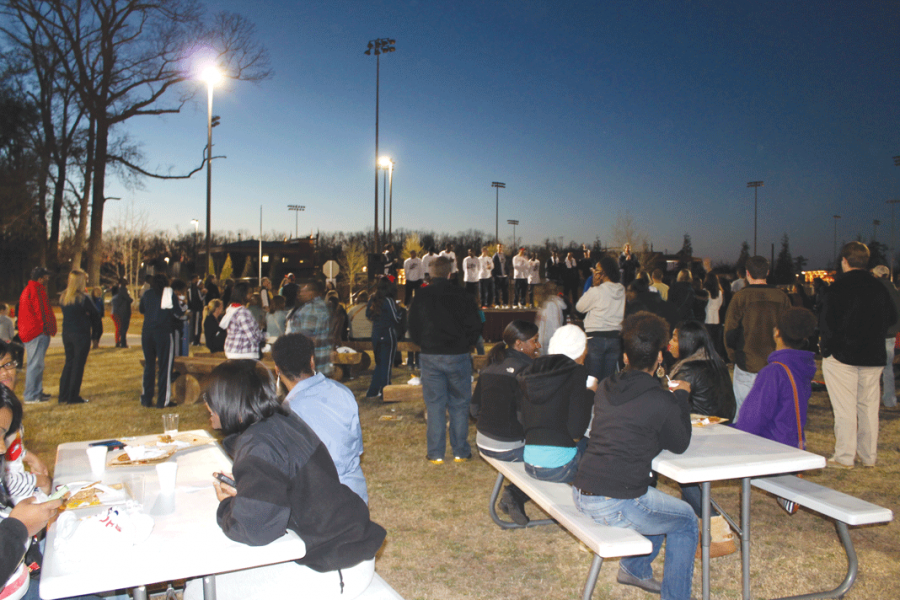 Students and faculty gathered outside the Baptist Collegiate Ministry (BMC) at 6 p.m. to honor the athletes as well as introduce this year’s homecoming court.

The FMU cheerleaders kicked off the bonfire with a performance.

Morgan Yarborough, a senior early childhood education major, who ran for homecoming queen this year, said she enjoyed watching Edwards up on stage.

“My favorite moment was when Coach Edwards presented the men’s team,” Yarborough said. “He always cracks me up.”

“I really enjoyed the bonfire,” Allen said. “You know it will always be a good time when Coach Edwards gets on stage and starts throwing cookies and making jokes.”

After the basketball teams left the stage, the homecoming court was introduced to the crowd. They went up one by one while the crowd showed their support for their favorite candidate.

“I had a great time at the bonfire because of my Kappa Delta sisters,” Yarborough said. “They were so supportive.”

Gerald Griffin, the newest inductee into the FMU Athletic Hall of Fame, was also introduced during the bonfire.

Griffin is the former baseball coach and athletic director at FMU. He established the baseball program at FMU in 1972 and became athletic director in 1973. He coached the Patriots for 28 seasons but retired from FMU in 2000. The new Griffin Athletic Complex is named in his honor.

Griffin was inducted into the FMU Athletic Hall of Fame the next day during the break in between the men’s and women’s basketball games.

Those who attended the bonfire received a free homecoming t-shirt and dinner. They served hot dogs, chili, cookies, hot chocolate and coffee.

Host for the evening Daniel Shipp, who is the FMU sports information intern, played rounds of trivia where students won prizes for answering questions correctly. The questions were about FMU and the basketball teams. Prizes included tumblers, fleece blankets and foam seat covers.