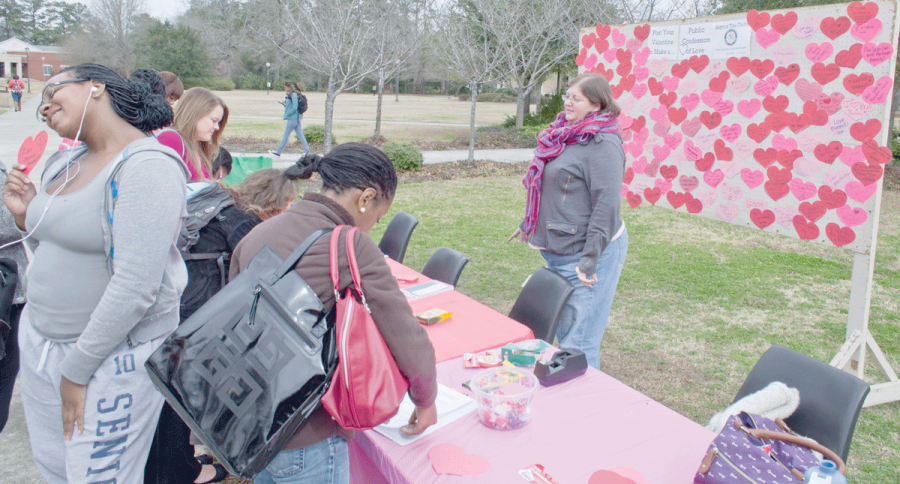 Sigma Tau Delta (STD), International English Honor Society, kicked off its first ever “Spread the Love” event on Valentine’s Day to promote literacy and create awareness about their organization.

Members and advisers greeted students on the Founders Hall lawn where they displayed a large board filled with hearts. Students were able to write a love quote, poem or profess their love to someone on these paper hearts.

Associate Professor Meredith Reynolds, an adviser of STD, worked at the event from 9 a.m. to 2 p.m. and said the group was receiving a lot of positive feedback from the students, who were having a lot of fun and hung about 150 hearts on the board.

During the event students picked out their favorite quotes to display on their hearts. Professions of love ranged from admirations of sci-fi movies to famous actors. Parents’ names were also displayed as well as the names of the students’ favorite animals.

Some students utilized their knowledge of foreign languages and professed their love in Spanish and French, both of which are languages are offered at Francis Marion University.

If a student was unsure of what to write they could chose a quote from a binder filled with lines from well-known literary works and their authors, such as the philosopher Plato. These quotes served to increase interest in famous works of literature.

Senior professional writing major Ashley Humphries, president of STD, said that one student actually professed his love to a secret crush on one of the paper hearts.

“There was one guy who actually wrote a heart to a girl he likes and she doesn’t know,” Humphries said.

According to Humphries, the purpose of the event was not only to spread literacy to the students of FMU, but also to spread awareness of their organization.

Reynolds explained that the organization, which has been on campus for 30 years and is a part of the Nu Rho Chapter, is active on campus but would like to acquire more members and begin doing more activities to interact with the student body.

“We were more active in 2009 and became less active since then,” Reynolds said. “We are pushing to get people involved.”

There were applications available to those who showed interest in joining. In order to join students must have a GPA above a 3.0 and have taken two English courses above the 200 level. Students of all majors and minors are welcomed to join.

Reynolds explained that Humphries, along with Vice President of STD Kristina Marra, is working hard to get the organization more involved on campus.

The group plans on having a bake sale in the upcoming months to raise funds and get their name out to the students. Reynolds said STD is planning the sale for next year.