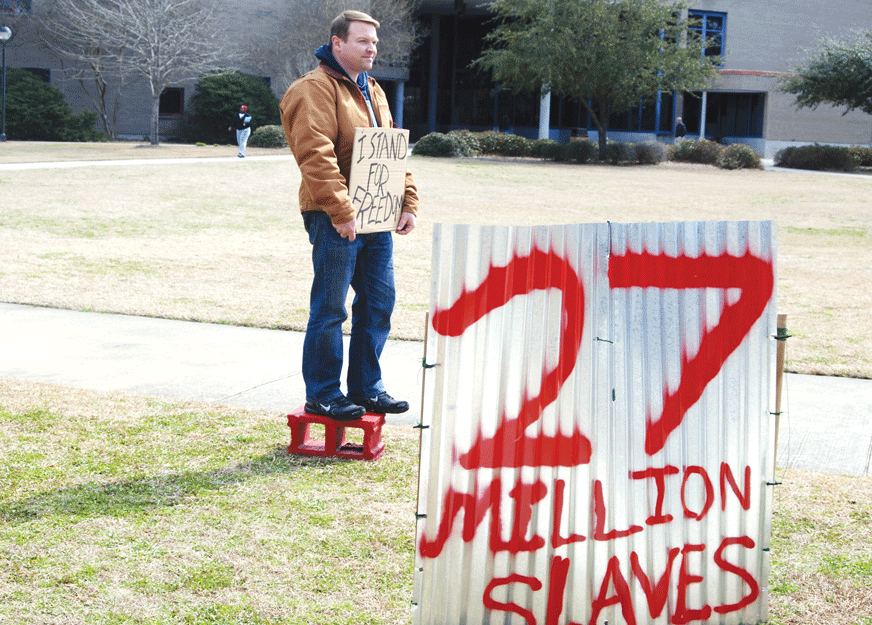 From Wednesday, March 6 to Thursday, March 7 more than 50 Francis Marion University (FMU) students participated in a 27 hour stand that advocated for the freedom of over 27 million people trapped in modern slavery.

Sponsered by Baptist Collegiate Ministries (BCM), the event was one of many held on over 500 campuses across the United States. According to Kendal Danford, campus minister for BCM, “Stand for Freedom” actually stems from a project by the International Justice Mission (IJM), which works to eradicate modern slavery in all its forms.

“On campuses all across the U.S., students are working in conjunction with IJM to petition the government to make a plan to help these people,” Danford said. “While standing for 27 hours, our campus collected 720 signatures.  These signatures will be going with those from other campuses to the White House.”

As a part of “Stand for Freedom,” IJM asked each participating campus to collect 1000 signatures for the petition, which will go to the White House. According to Danford, the amount of signatures collected from FMU students surpassed expectations.

“There are only about 4000 students at FMU and this goal is oriented toward schools way bigger than ours,” Danford said. “Our original goal was to get 400 signatures, but then we hit 500 so we changed it. To get over 700 is a really big deal for us because it makes up about 18 percent of our campus.”

“Last year, President Obama recognized on national television that slavery is still a problem in the world,” Danford said. “Now we are asking the president and Congress to work together to come up with a plan of action that will work toward eradicating the problem.”

Students participating in “Stand for Freedom” stood on red cinderblocks near the fountain outside of Founders Hall (FH).  Many wore cardboard signs that read “I stand for freedom” and quoted statistics about modern slavery to catch the attention of passersby.  They stood in shifts and remained at the post for more than 27 hours.

According to Danford, students who attended BCM were able to sign up for shifts for the past few weeks to stand during the 27 hours of other organizations, including the Psychology Club and Young Gifted and Blessed (YGB) also volunteered time to come and stand for a period of time.  Danford said that several passing students felt compelled to stand after hearing about the cause.

Tim Laurent, a senior mass communication major, stood for several hours.  For part of this time, Laurent stood in a cage set on the lawn while carrying a cinderblock on his shoulders.  Laurent said that he stood for those who cannot stand for themselves.

“People asked me how long I had to stand in there,” Laurent said. “I told them that I did not have to.  The point is that there are people in the world who have no choice.”

The IJM is a human rights agency that works to rescue victims of violent oppression.  This includes, but is not limited to, slavery and sexual exploitation.  According to their website, ijm.org, the professionals employed by the organization work to make sure that the poor are effectively protected by public justice systems.