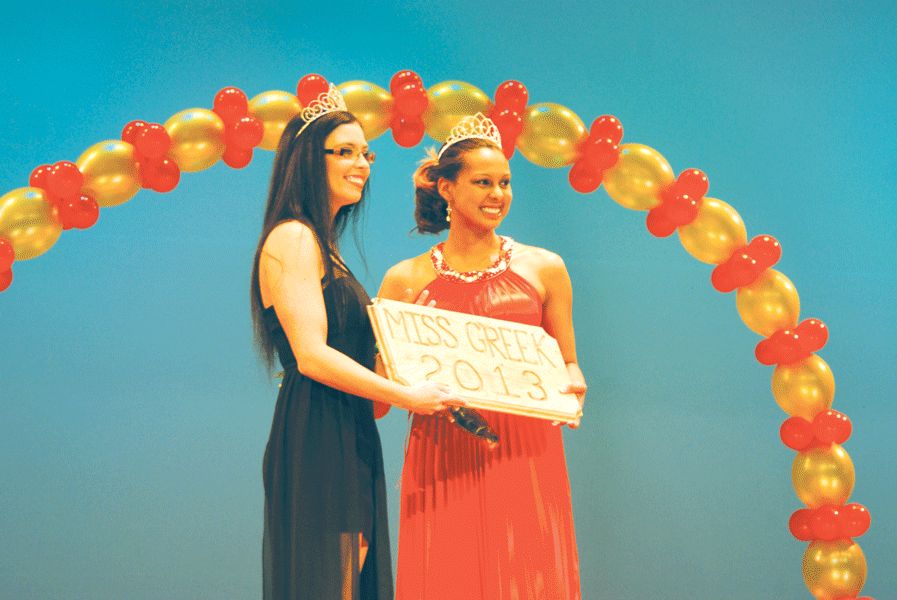 Porter, a sophomore education major and member of Alpha Delta Pi (ADPi) said she was nervous because this was her first pageant but she still enjoyed herself.

“Sometimes you have to step out of your comfort zone,” Porter said.

The KA organized the pageant to help raise money for the Muscular Dystrophy Association. This is their 32nd Miss Greek Pageant, held annually to raise money for charities.

The night began with a greeting from the president of the KA, Zeb Freeman a  junior biology major.  The contestants introduced themselves while modeling their casual wear. Next, they modeled their evening wear dresses to be rated by the judges.

The judges then picked their top three contestants which included Lozano, Baldwin and Porter. These contestants were asked to answer questions on topics including gender bias, how school has help them and how they would change the world if they only had 30 minutes.

During the intermission, Veronica Wilson, senior mass communication major, sang a cover of Etta James’s song “At Last.” Afterward, the 2012 Miss Greek Morgan Rodgers gave a few encouraging words to everyone. She thanked everyone who supported her and wished the best for Miss Greek 2013.

Will Isgett is a member of The Muscular Dystrophy Association and was the guest speaker at the pageant. Isgett, who is diagnosed with Beker muscular dystrophy spoke of how muscular dystrophy has affected him and how grateful he was to be able to share that with those who are working to help others who  of the condition.