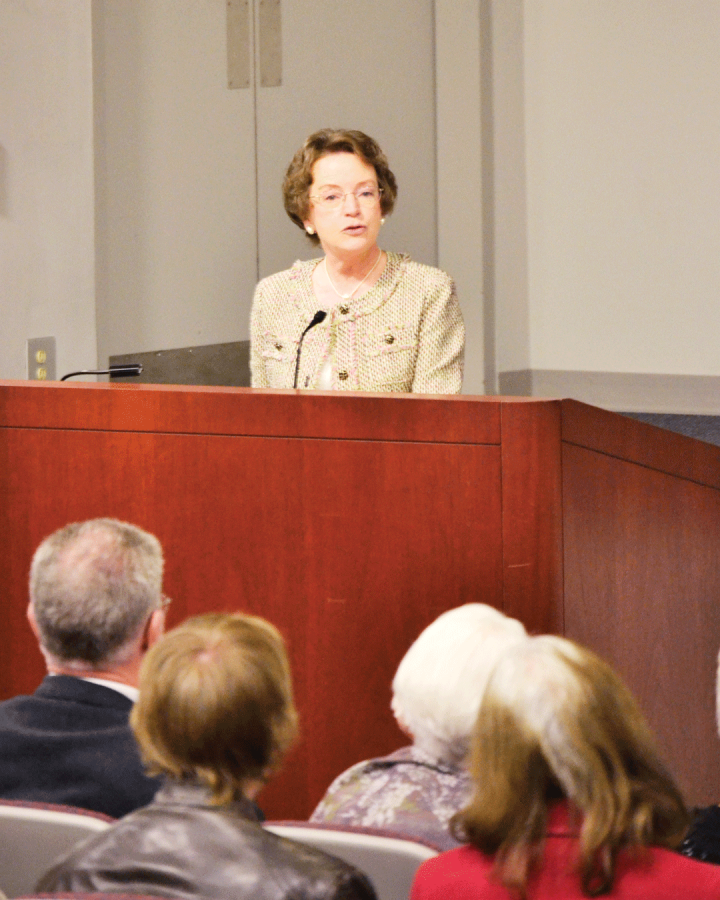 More than 50 faculty and staff members of Francis Marion University (FMU) gathered in Lowrimore Auditorium for the presentation of the 7th annual Moran Address on Thursday, March 28.

Dr. Eileen Kirley-Tallon, professor of political science, gave this year’s address, which celebrates the life of former Vice President of Academic Affairs, Dr. William C. Moran. Kirley-Tallon, who is retiring after 39 years of service to FMU, was chosen to deliver the Moran Address because the speaker is traditionally a retiring professor. Kirley-Tallon recalled that she enjoyed working with Moran, who challenged her to be her best.

“I have served on committees with him before and have only disagreed with him once,” Kirley-Tallon said. “I am glad that the committee listened to him because it turns out I was wrong. From him I learned to be a true professional.”

In her address entitled “All You Need is Love,” Kirley-Tallon spoke about the relationships she built while working at FMU, which was known as Francis Marion College (FMC) when she first arrived.  Kirley-Tallon talked of the friendships that were forged and their effect on her throughout the years.  She said that since the school was so small she got to know her fellow staff members well.

“Some of the people I started here with have died and each death has felt like I lost a family member because we were a family,” Kirley-Tallon said.

Provost, Dr. Richard Chapman, gave an introduction of Kirley-Tallon that chronicled the history of her career and achievements.  According to Chapman, she earned her baccalaureate in political science from the University of Cincinnati, and her Master of Arts and Ph.D. from the University of Pittsburgh. Chapman also said that Kirley-Tallon arrived at FMU in 1974, where she was later named FMU’s Distinguished Professor in 1994 and the John Monroe Johnson Holliday Professor of Political Science in 1988. Chapman said that Kirley-Tallon has served her community and profession in a variety of ways, including through various positions on institutional committees.

Kirley-Tallon spoke candidly of how she discovered her passion for political science at a young age.  She told the audience about some of her personal studies on the subject and gave a short lesson on the Electoral College in the United Kingdom, which she studied during one of her sabbatical leaves. Kirley-Tallon also gave examples of how her interest in political science shaped her career at FMU, including her development of the course Women and Politics and her position as coordinator of several political programs.

Kirley-Tallon ended the address by thanking FMU for her successful marriage to her husband of almost thirty-nine years, Tom Tallon.  She said she met her husband, who was then a real estate agent, while searching for a home in Florence.  She said Tallon was a friend of an associate, so she thought he would make a trustworthy realtor. Kirley-Tallon said they went on their first date right before she signed for the house.

Before the conclusion of the program, Kirley-Tallon was presented with a clock inscribed “Moran Address March 28, 2013.”

“If there is anything my students can tell you about me, it is that I always want to know what time it is,” Kirley-Tallon said. “Thank you Francis Marion, for everything.”

Audience members were invited to a reception at The Cottage after the program, where they would be able to view the text of Kirley-Tallon’s address.