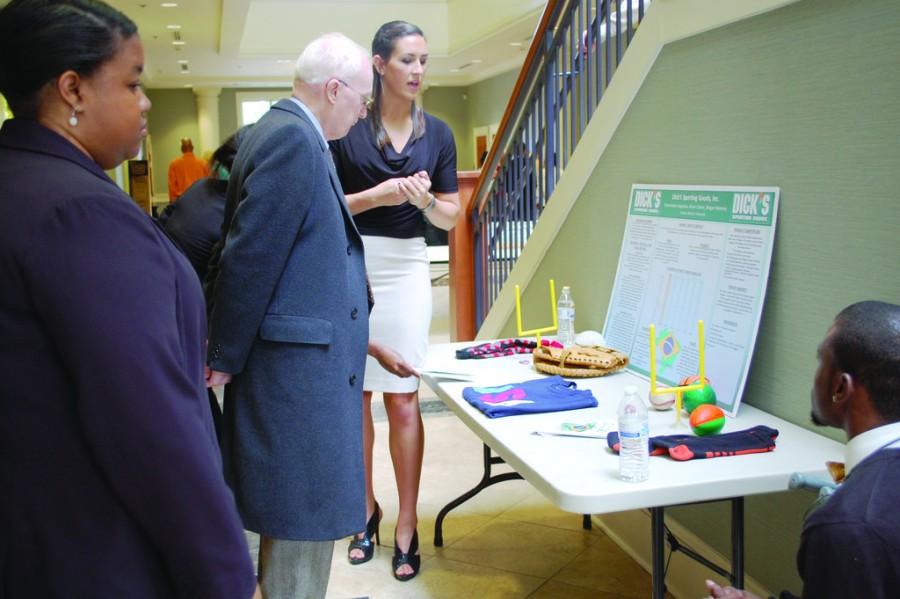 Students in the fall 2013 International Marketing class, broken into five teams, participated in a poster presentation on November 21 in the Lee Nursing Building (LNB) foyer where they developed sample marketing plans for American companies that are not currently operating in the chosen international countries.

Dr.  Kwamaka Anaza, assistant professor of marketing, instructed this course. According to Anaza, this poster presentation was the first of its kind.

“I really wanted to have my students display their knowledge,” Anaza said. “I wanted them to share with the Francis Marion family what all they were learning in the classroom, and how this could be instrumental to American companies who are planning to expand internationally.”

“Our Spanish competition is Port Aventura which is in Barcelona as well,” Wallace said. “We decided to price our package 10 dollars cheaper than Port Aventura, but 10 dollars more than Walt Disney, so we could generate profit more quickly than them, without overpowering the competition in terms of prices.”

The “Planet Fitness” team chose Shanghai, China as their sample country. Group members included senior marketing major Johnathan Williams, senior marketing major Monica Nedelcu and senior visual communication major Courtney Curry. Curry said they chose the proposed area for their gym in Shanghai to target the middle-class, which they felt would be the best fit for the country.

Senior marketing major Brian Colvin, senior psychology major Shermaine Augustus, and senior marketing major Megan Mooney were members of Team “Dick’s Sporting Goods.” The group explained they chose Brazil as their target country because the country has an emphasis on many sports, and because of the next Olympic Games the country is scheduled to host in 2016.

Colvin felt that the group presentation process was “a great learning experience” and an opportunity that related to the work environment he expected to be in after graduation.

Although Team “Burt’s Bees” did not present, group member senior business major Colby Hancock described the groups reasoning for choosing Kenya, Africa as their country to market toward.

“We looked at household income and what resources are already plentiful in the country,” Hancock said. “Africa has a lot of natural resources that can be used in our products which would cut down on import cost, and create a clean, more organic product.”

Anaza explained that some of the students had a personal interest in working for the company they chose, and are encouraged to now reach out to these companies and use their presentation as an interview aid.

“This is a semester long project where these students are doing something that these companies themselves have not done,” Anaza said. “They are doing the companies’ job for them and are being especially careful to detail because the outcome is success for the company.”

Anaza also said she hopes to have more poster presentations for this course in the future.