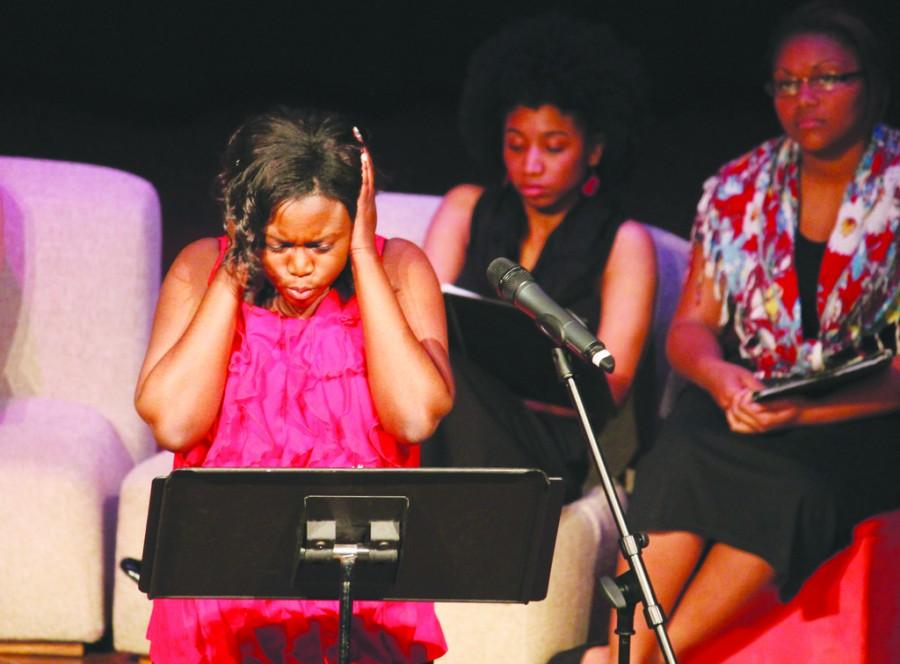 “Taboo topics” were center stage for an audience of more than one hundred when “The Vagina Monologues” was put on at Francis Marion University (FMU) Thursday, March 27by the Gender Awareness Committee, Gender Studies Program and Department of Fine Arts.

“The Vagina Monologues” are produced by Dr. L. Dawn Larsen of the theatre department each year, but this year Larsen asked a student, Katelyn Lamb, to direct the program, which discusses sex, rape and domestic abuse toward women.

“People don’t talk too much about rape and domestic violence,” Lamb said.  “It’s really important that the word does get spread. I think one of the best ways to learn is to watch a show.”

Lamb, senior theatre major, said the show seems powerful because it is a visual learning experiment, and not just statistics.

As producer, Lamb held auditions for the show and cast nine young women after individual rehearsals.

That night, the audience watched as those cast become characters from different walks of life.

“I heard about the play and was really interested in what it was,” White said.  “I just wanted to be more into the theatre program.”

Mecca Butler shared White’s interest; Butler said she auditioned for the show because it was a good opportunity to become better-rounded, and she supported its cause.

Ashley Davis, 28, from Florence-Darlington Technical College was in attendance and said a few of the topics were not what she was used too.

Davis said she was a rape victim and the stories did a good job of getting the message across.  Her only critique was that she wished the monologues went more in depth about the effects of such trauma.

Deandra Jones, senior psychology major, has seen the show in the past and said it can be used as an educational tool.

“I definitely think it could be used as an educational tool with the stories,” Jones said.  “It’s a great, entertaining way of getting the point across. People don’t pay attention to pamphlets.”

Jones said people do not always look at statistics, but one statistic that captured her attention was South Carolina now ranks No. 1 as the state in which women are domestically murdered by men.

Nakowski said he believed the production was successful in showing there are two sides of a story, but the sexual tone caught him by surprise.

“A lot of times you see males [being] vulgar, but I always thought females were vulgar amongst ourselves, so I thought it was surprising but necessary,” Jones said.  “People think we’re [females] are nice, calm and quiet, but sometimes, we are angry.”