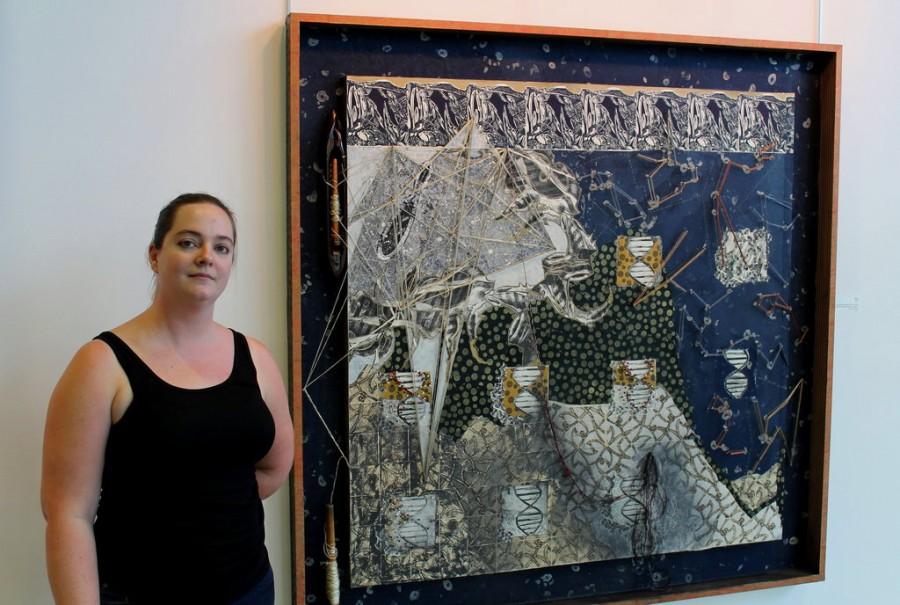 In between classes and during free time Francis Marion University (FMU) students and staff have the opportunity to view the work of regional artists in the first-floor lobby of the Hyman Fine Arts Center.

Artist Adrian Rhodes’ work is the latest collection on display in the Art Gallery Series. Her collection, titled “Bits and Pieces,” is on display from Aug. 19 to Sept. 16 and features a variety of printmaking and mixed media pieces.

“I’ve always had a pencil in my hand,” Rhodes said. “I decided to major in art in

college … because I couldn’t imagine myself doing anything else.”

Rhodes graduated from Winthrop University where she earned her M.F.A. in painting and printmaking.

Rhodes has won multiple awards at such competitions as the S.C. Festival of Flowers

Juried Exhibition and the Annual Pee Dee Regional Art Competition.  Despite her accolades, Rhodes says that her proudest moment as an artist is simply “getting up and going into the studio.”

“Art is a way to process the morass of life,” Rhodes said. “I reach into myself and pull out a complex web of influences and interactions, sift them into balance and see how

they coalesce into something meaningful.”

FMU Gallery Curator Walter Sallenger noted that when looking for artwork to display in the Art Gallery Series, he searches for artwork that will inspire both FMU student artists and artists within the community.

“Since Rhodes’ work incorporates so many different media, including printmaking,

painting, fabric and sculpture, there is something there that will interest many different artists,” Sallenger said.

Rhodes says that she is excited to have FMU students view her work because they will be participating in a conversation.

“[Artwork] is only complete when people see it,” Rhodes said.

Sallenger explains that one of the features that make Rhodes’ work so appealing is the dialogue she is able to create.

“[Rhodes] is thinking about big themes,” Sallenger said. “I’ve noticed that people spend a long time trying to identify the elements that make up Rhodes’ personal iconography and then talk about what she seems to be saying.”

Rhodes enjoys the dialogue between artist and viewer and strives to create work that has a “sense of searching and questioning.”

Rhodes says that success as an artist is achieved through hard work and dedication. It took roughly two years for Rhodes to complete the artwork displayed in the “Bits and

Pieces” exhibition; however, Rhodes says that since “each piece builds off the ones before,” it really took her a lifetime to construct each piece.

“Fathom” is Rhodes’ favorite piece in the collection because it is the piece she has most recently completed.

Rhodes currently teaches at Wingate University, is the mother of a three-year-old

daughter and enjoys running in her spare time.

Rhodes has three more art shows booked before March 2015, and has several additional pieces of artwork on display at The Midnight Rooster coffee shop in Hartsville.

The next exhibition in the FMU Art Gallery Series will begin on Sept. 19 and will include a collection of digital collages titled “World Consumerism” by FMU graduate Bethany Luhman.  A collection of ceramics titled “Lowcountry Clay Sampler” by the artists from Cone Ten Studios in Charleston, SC will also be featured.