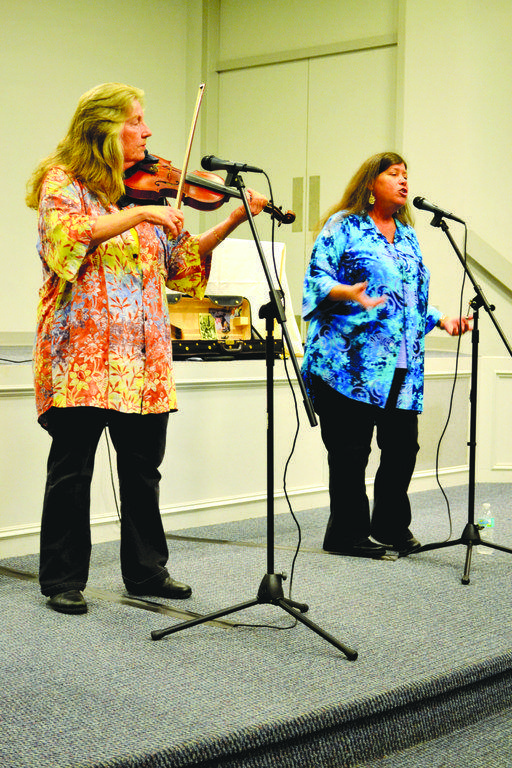 The first event was titled “Cuentos Latinos” and featured storytelling, accompanied by music; the second event was titled “Being Latino in South Carolina.” Through statistics and personal experience testimonies, the speaker explained what it is like for Latinos living in the American culture.

The musical storytelling duo was composed of Kim Rivers and Nancy Croakford.             Rivers is a Cuban-American storyteller who has performed on ABC and the South Carolina Educational TV network. She met Croakford while both were working at Walt Disney World. Rivers was a puppeteer and Croakford played fiddle for a show.

“Both featured guests had unique perspective on how the Spanish culture has influenced their lives,” Assistant Dean of Students Daphne Carter-McCants said. “It is exciting to hear about the trials and triumphs of Latinos through storytelling and leadership.”

As Rivers and Croakford joked with students during their sound check and urged the audience to clap to the beat of the fiddle during an opening song, they set the tone for an interactive presentation.

“Please feel free to laugh, comment and be yourself,” Rivers said. “This is not a class.”

During River’s animated storytelling of a young cockroach that falls in love with a little rat, students laughed and translated Spanish words on River’s cue.

According to Rivers, the story is told in almost every Spanish-speaking culture; however, the animals depicted may vary.

“I thought it was really cool how the violin and storytelling went well together,” Wall said.

Rivers sees storytelling as a way to hold on to her Hispanic culture.

“Time changes our culture,” Rivers explained. “It changes the way we see ourselves in light of our heritage, but if we grab it and hold it and claim it and keep it in our hearts and share it with others, that culture and that heritage will not die.”

Rivers said that one of the reasons she enjoys storytelling is because, “it’s a way to get into somebody’s mind with a message without being direct.”

Ivan Segura was the speaker for the second presentation. Segura is the treasurer of the South Carolina Hispanic Leadership Council and president of the Council of Mexicans in the Carolinas.

Segura noted that Hispanics are the largest and fastest growing ethnic group in S.C. He also said that many Hispanics come to the U.S. because they are attracted by the economic opportunities.

He noted that it is important to realize that not all Hispanics are Mexican. He drew on that point and illustrated with the fact that the minimum wage in Mexico is 64 cents. The low rate makes the U.S.’s $7.25 per hour very appealing.

“If this is the only thing you can remember, please do,” Segura said. “Sixty-four cents – this is the minimum wage in Mexico.”

Segura also explained key differences between Hispanic and American culture such as language, family, displays of affection, religion and holidays.

According to Segura, Hispanic immigrants who speak the English language will receive more opportunities than those who only speak their native tongue. He also mentioned that Spanish-speaking Americans who know English as their first language have a special advantage in the U.S.’s changing demographic.

“Being bilingual is an ability that you should cherish and use in the workforce,” Segura said.

Sophomore accounting major Yaping Yang says she is taking Spanish classes not only because she enjoys learning languages and meeting new people, but because she is interested in Latino groups and knows that they are a growing population in the U.S.

“It is important to know that there are an increasing number of immigrants and to learn the differences between different cultures,” Yang said. “You need to know what is happening in society in order to be involved in diversity.”

Students interested in integrating Hispanic culture on the FMU campus were encouraged to go to an interest meeting for a new student group called Adelante. The interest meeting was held on Thursday Oct. 2 at 4 p.m. in Founders Hall.

Each speaker for this year’s Hispanic Heritage Month program at FMU was presented with a gift from the university on behalf of the Office of Multicultural Affairs and the Multicultural Advisory Board.