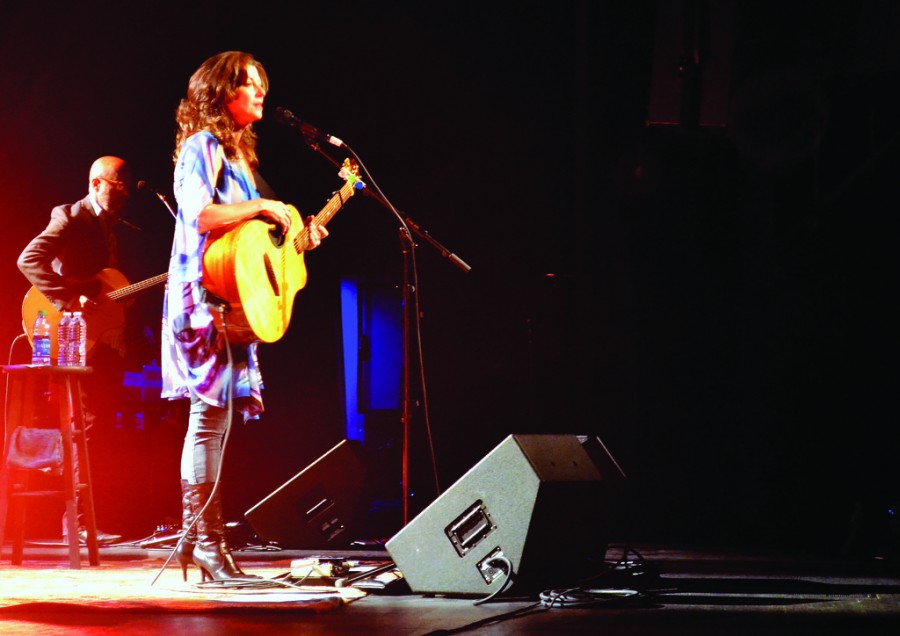 Amy Grant, “The Queen of Christian Pop,” brought Christian pop to the FMU PAC. The performance was a treat for both Christians and pop music fans to enjoy.

Grant’s talent for bringing multi-vocal lyrics coupled with pop/rock music gave Grant the edge to successfully reach out to a wider audience. She performed hit songs from her most recent album “How Mercy Looks from Here.” The album is her first full studio album in 10 years.

Concert goers were able to purchase tickets at the PAC website or by calling the PAC box office.  Tickets were on sale for $69, $89 and $99. Advance tickets were purchased at the box office before the concert.

Born in Augusta, Ga., to a religious and devoted family, Grant was destined to become a Christian pop singer. She recorded her first album, “Amy Grant,” as a teenager with Word Records.

Her album produced three Top Ten Christian radio lists singles such as “Old Man’s Rubble,” “Beautiful Music” and “What a Difference You’ve Made”. The album sold over 500,000 copies, making it a Gold Album. This was just the tip of the iceberg of popularity and success that awaited Grant in the following years.

With the success of her first album, Grant was pushed head-first into the Christian music industry in 1977. Rock music with Christian teachings brought a novel and fresh face to the inspirational music sub-genre.

While she was pursuing her music career full-time and recording her next album “My Father’s Eyes” in 1979, Grant met Christian songwriter and future husband Gary Chapman. They married in 1982 which coincided with the release of her album “Age to Age.” Grant earned her first Grammy Award for Best Gospel Performance in “Age to Age” and received numerous Dove Awards from the Gospel Music Association.

Her album “Unguarded” (1985) morphed her music from soft rock to pop. Her single “Find a Way,” successfully entered her into the Top Pop music charts.

Grant expressed her personal troubles through her 1997 album “Behind the Eyes.” Not long after the debut of “Behind the Eyes” Grant’s marriage of 16 years to Chapman ended in a divorce.

Though Grant’s music career was not over, she did branch out to a few acting roles. One of her most noticeable appearances was made in a 1999 television movie called “A Song from the Heart.”

Grant has also won more than 20 Dove Awards and six Grammy Awards over a span of six years (1983-86, 1988 and 2005). The most recent award was for Best Southern, Country, or Bluegrass Gospel Album for “Rock of Ages…Hymn and Faith.”

Grant has received numerous special awards and achievements such as “Nashvillian of the Year.”

Grant recently released a remix album called “In Motion: The Remixes.” No matter what situation she is going through, be it positive or negative, controversial or commendable, Grant will forever be inspired by her music and strive to live up to her reputation as “The Queen of Christian Pop.”