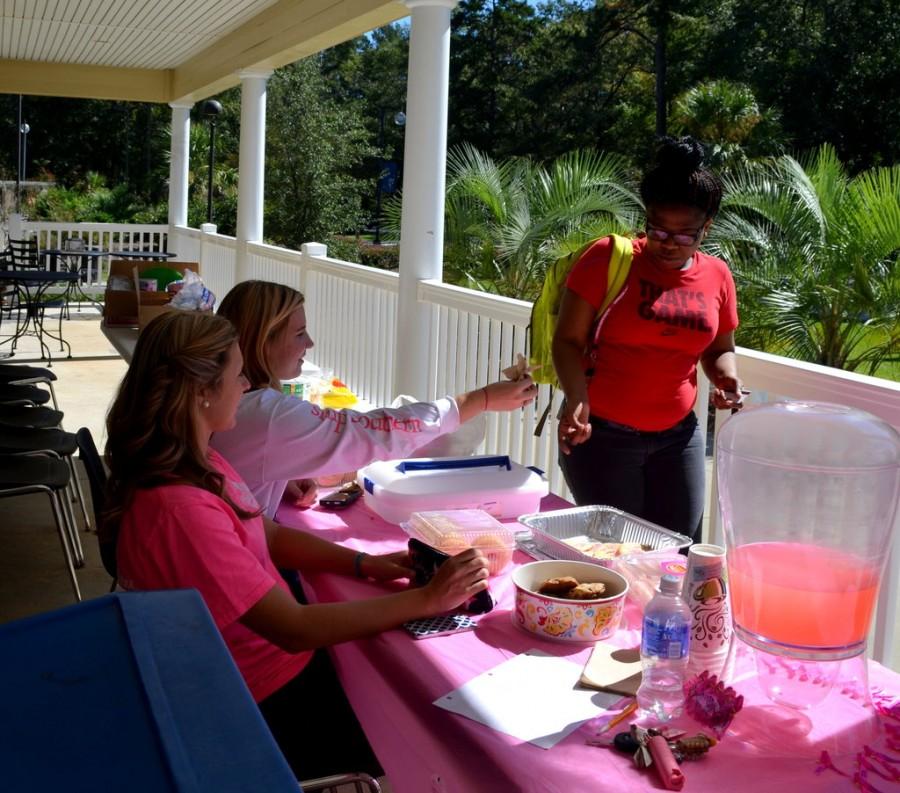 Throughout the month of October, the Zeta Tau Alpha (ZTA) sorority at Francis Marion University (FMU) is promoting breast cancer awareness and education with its annual “Think Pink Drink Pink” bake sale.  From 10 a.m. to 2 p.m. on Friday, October 17, several ZTA sorority sisters sat at tables outside of The Grille selling pink-hued cookies, cupcakes and lemonade, along with donuts. The confections ranged in price from 50 cents to one dollar.

The ZTAs have also become synonymous with breast cancer education since the group also works year-round to inform others about the signs and symptoms of the disease.  “Think Pink Drink Pink” is one of six events planned on campus throughout the semester, for which the ZTAs aim to raise $3,000 for their national foundation.

“[I like] being able to raise money and [doing] something at my school to help other people.  I think that’s wonderful,” said Ashley Harris, a ZTA who is an English major in her sophomore year at FMU.  “My grandma had breast cancer and that was a tough battle for my family, in general.  Learning that ZTA’s philanthropy was breast cancer meant a lot to me.”

In keeping with the theme of the bake sale, the ZTAs took the time to offer students some free items to help keep breast cancer education and early detection at the forefront of their minds.  Students could take away pink breast cancer awareness pins that read “Think Pink”.  There were also plastic key chain cards students are able to scan at any time for information about performing breast self-exams.

Many of the ZTAs at FMU and around the nation are motivated to work for the breast cancer cause because it has become widely recognizable to the public and it sends an empowering message to women. Others, like Harris, are inspired to act because they know or indirectly know of someone whose life has been affected by the disease.

“Being able to raise awareness for breast cancer, and being able to help other girls learn how they can take care of their bodies and learn early on if they do have symptoms of breast cancer [also] means a lot to me,” said Harris.

The ZTAs had no problem getting attention to their cause as students were enticed by the brightly colored desserts.  But some students were purely inspired to help the ZTAs spread the message of breast cancer awareness.

“I hold a lot of respect for the ZTAs.  They’re a great sorority on campus, and I do everything I can to help out Greek life,” said Christian Burris-Durham, sophomore and dual degree student.  Burris-Durham stopped by the bake sale stand to exchange a quick hello before picking up a pin for himself and another for a friend.

Jordan D’Angelo, a senior biology major, also chose to skip on the sweets, but said he never misses an opportunity to donate his spare change whenever he sees groups on campus working towards a good cause.

“What they do is good,” D’Angelo said about the ZTA’s philanthropic mission to raise money for breast cancer education. D’Angelo also said we should all try to help out as much as we can.  “It may not be a lot, but it’s at least something that we can do for the community and for the organization.”