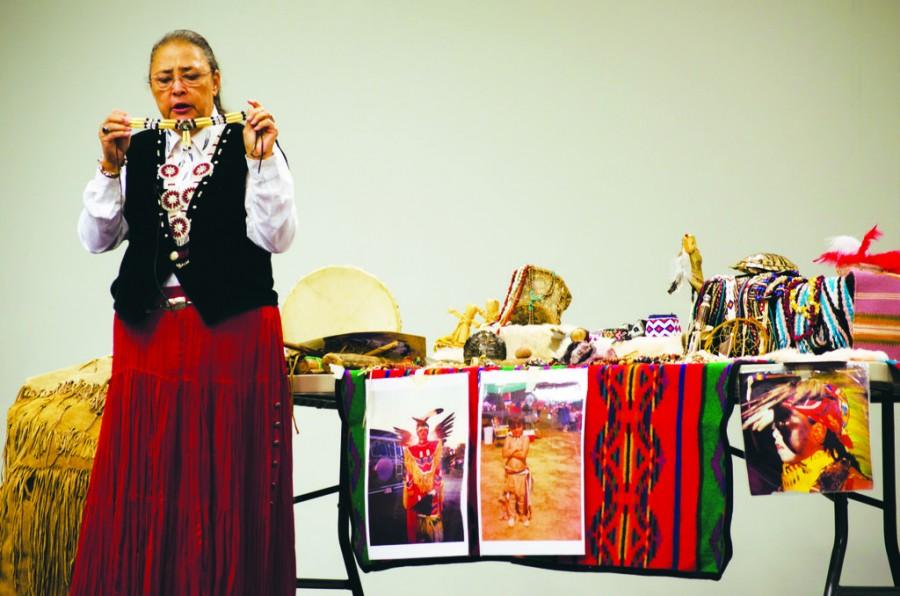 For this year’s program, Francis Marion University (FMU) hosted Barbara Locklear, a member of the Lumbee Indian Tribe of North Carolina. Locklear has traveled around the United States, teaching people about the history of Native Americans for more than 30 years.

As a part of her presentation, Locklear greeted the audience with a traditional “friendship greeting,” which is similar to an average wave, only both people raise their hands palm forward with their fingers spread apart to show that they have nothing to hide.

In addition to the traditional greeting used by various tribes throughout the Eastern United States, Locklear used multiple handcrafted pieces of jewelry and replicas of traditional Indian items, such as drums and clothing from the Lumbee tribe, as well as other tribes east of the Mississippi River.

Locklear used her knowledge of the traditions of Native American history to teach the audience what it would have been like to live in an Indian tribe prior to the arrival of Europeans. She also conveyed how day-to-day life changed for native tribes after contact with the first European settlers.

The vast changes since the coming of the Europeans, including advances in technology and communication, have caused members of the Lumbee tribe to teach their children to “walk in two worlds.” The children are taught to live as a part of modern society, but also to remember their roots and the traditions of their tribe, as well as other Native American tribes.

Both children and adults attend “powwows” and various celebrations throughout the country to remember and honor their heritage; these gatherings are often used as way to practice the traditions of their ancestors. Locklear used her personal experiences in making traditional jewelry and clothing to help the audience understand what it would be like to make things the way Native Americans would have hundreds of years ago.

Locklear uses her experience to educate students and adults about the culture she grew up in. She tells stories, including the one she shared at FMU about the creation of the owl and the rabbit, to help children understand where things come from. These ancient stories were passed down through the oral tradition and have been used by Native Americans to explain everything from creation, to the end of the world for generations.

Sharing in museums, libraries, colleges and festivals, Locklear teaches her audiences about the history of her people and the traditions they uphold to keep their heritage alive. Educating others on the importance of tradition and history is what keeps those traditions thriving for future generations to not only appreciate, but to enjoy.