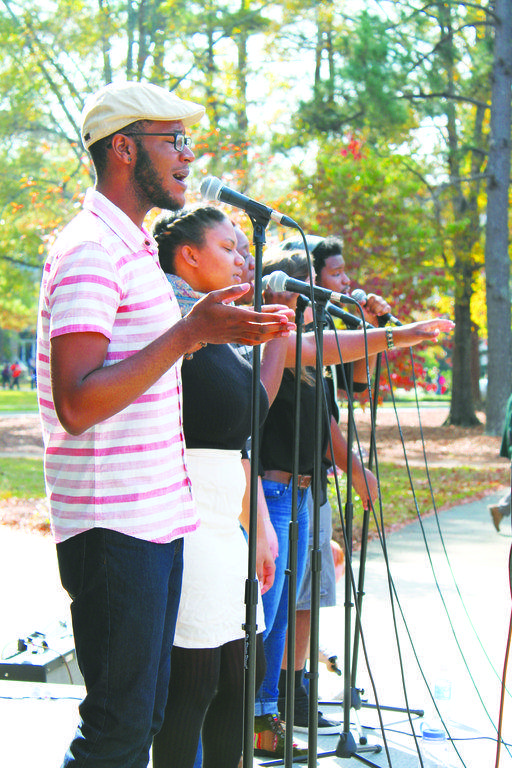 The Francis Marion University (FMU) Music Industry Ensemble treated faculty and students to their renditions of songs selected from the past three decades of popular music.  The all-student band jammed to music from multiple genres, such as R&B, soul, modern jazz and rock, for 45 minutes in the breezeway of the Peter D. Hyman Fine Arts Center.

The ensemble opened their set with a group performance of the rock anthem “Love Runs Out.” Afterwards, the ensemble quickly switched gears to cover the pop song “Problem,” in which Caroline Spearman wowed with her spot-on cover of Iggy Azalea’s rap verse.  Other standouts included, “All About that Bass,” led by Jasmine Reid, and “ABC,” which was led by Caroline Spearman and Jaylen Still.

Director of the Music Industry program and assistant music professor Dr. Brandon Goff said the audience can expect to have an even better experience by attending the main event, which takes place at 7:30 p.m. on Thursday, Nov. 20 at FMU’s Performing Arts Center (PAC).

“It’s fantastic,” said Goff.  “The show is the quality you would see in any major city…, like Nashville and Atlanta.  It really is a… huge showcase that we perform in the PAC, using all of the lighting and the sound reinforcement that the PAC has at its disposal.”

Goff said his students have worked very diligently throughout the semester in preparation for the fall concert, and he is pleased with the chemistry the ensemble has developed.

The group has planned to perform a vast array of songs including recent chart-topping hits such as “Stay With Me,” “Bang Bang” and “Happy,” along with timeless classics such as “Chain of Fools” and “Stayin’ Alive.”

Admission is free for students with an FMU identification card.  Tickets are five dollars for the public and may be obtained at the PAC box office.  To make reservations, call the PAC at 843-661-4444 from noon to 5 p.m. If you would like more information, contact Dr. Brandon Goff at bgoff@fmarion.edu.