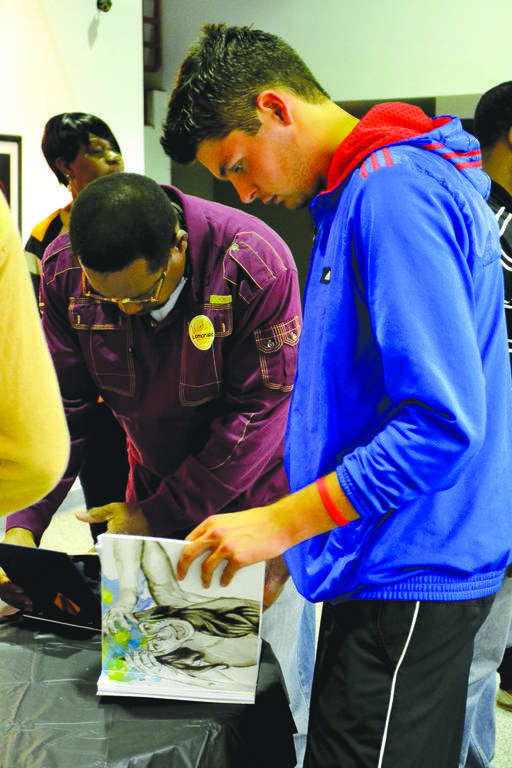 Seniors participating in the show plan to graduate in December and the show gave them an opportunity to display their choice work, and interact with attendees.

The show was titled Five Second Rule. Ezekiel explained that the title is a play-on-words, which sprung from the five graphic design majors and two photography majors displaying their work.

McElveen, a graphic design major, said that he has enjoyed studying art at FMU.

“I like the fact that you can create whatever you imagine … into a piece that people can look at, enjoy and learn from,” McElveen said.

McElveen is a sports fan and desired to combine his enjoyment of sports and his passion for art in his show. He created illustrated graphics, designed to educate young athletes, coaches, parents and teammates about concussions.

Ezekiel, a photography major, put a creative spin on seemingly normal night landscapes. She began by setting the timer on her camera, then spun glow sticks in the distance until the picture took and finally edited the photo until she achieved the desired effect. She explained that her inspiration for the photographs came when she was gazing up into the moonlight one night, which is why she titled the series of photographs Evening Lights.

“Evening Lights is a body of work that I created to show the mysteries of nature that one could only imagine,” Ezekiel said. “I use the technique of light painting to create unique shapes and lines within my landscape images that I captured at night.”

Smalls, a graphic design major, chose to use her aunt’s lemonade recipe as her inspiration for her display, since she’s really close with her family.

“I always drew and colored when I was little,” Smalls said.  “I’ve always loved art.”

An eighth grade field trip to the South Carolina Lottery Department to learn how the department created posters sparked her interest in graphic design. After taking a graphic design class in high school, she knew that was the subject she wanted to study at FMU.

Kinser chose to display photographs of abandoned buildings and illustrate the stories that they tell.

“These places are empty and left rotting,” Kinser said in her artist statement. “Most people pass by these places without a second glance, if they even acknowledge them in the first place.”

When taking the pictures, Kinser tried to talk with people who had connections to the abandoned buildings in order to most effectively illustrate the scenes. She chose to print the pictures on aluminum sheets in order to give the photographs a “sleek, modern look that is reminiscent of what the buildings once were.”

Seniors were able to choose the direction they wanted to go with their displays, while professors guided them and helped them develop vision.

“[The professors] helped us from the very beginning stages to the hanging up of our work,” Ezekiel said.

The senior artists invited friends and family to the art show via Facebook groups, word of mouth and fliers.

Refreshments were available for attendees. Guests viewed the artists’ works, talked to artists and looked through their portfolios. Each senior included in his or her display an artist statement explaining the inspiration for their work and offered personal business cards to attendees.

Senior history major Dori Brandenburg said that she came to the art show to support friends who were displaying their work. She explained that while she is not an art major, she still greatly enjoys it. Freshman computer science major Terrik Boatwright said that he did not know any of the seniors displaying their work personally but wanted to come to the show simply because he enjoys art.

Whether you’re a supporter of local artists or an avid art lover, the FMU senior art show always has interesting and unique pieces on display.