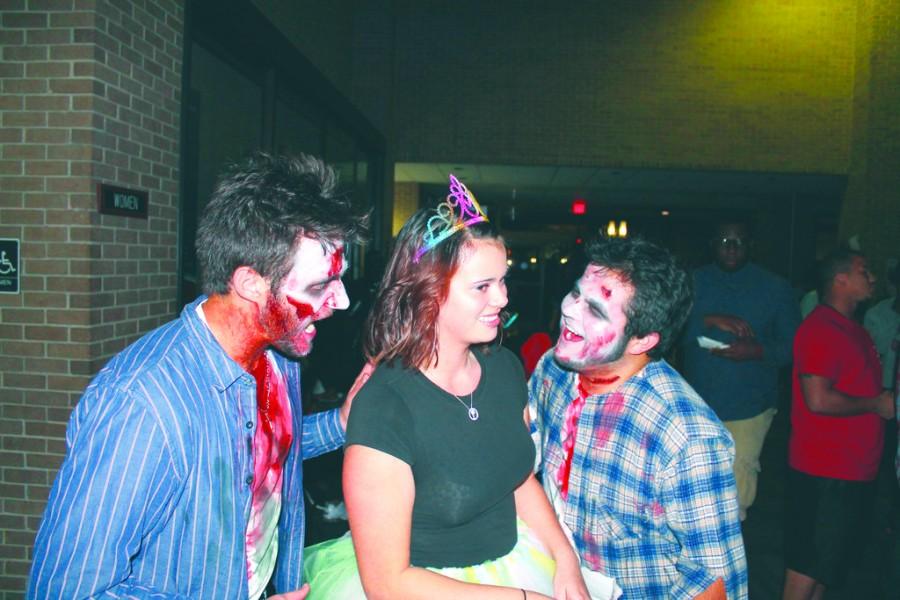 Hundreds of students gathered together to dance the night away at the annual Carnevil Halloween Bash on Oct. 30 in the Smith University Center (UC).

This year, the Carnevil event was a joint effort by the University Programming Board (UPB) and the Diplomats.  The two university-sponsored organizations are among some of the biggest organizations on campus.  They came together under the coordination of Jamal Lightbourne, junior political science major and president of the Diplomats, and Latarsha Green, the executive chair of UPB.

Students created a line that went out the doors and started to wrap around the UC.  Carnevil sported a Mardi Gras theme with undertones of the Joker from the Batman movies.  The Mardi Gras aspects appealed to students who wanted to stray away from the spooky areas of the holiday while the Joker aspects kept a creepy Halloween vibe for the night.

“I am elated at the number of people that showed up tonight,” Lightbourne said.  “It is events like this that keep students involved on campus.  Students need to have an outlet away from studying and classes to just have fun and let off some steam.  This event happens to fit perfectly in the calendar during a time when students are stressed out with exams and finals approaching.”

Costumes for the event, although not required, were highly encouraged.  The majority of students that attended Carnevil came decked out in their best Halloween gear.  Costumes ranged from sexy vampires to ladybugs and serial killers.

Towards the end of the night there were several costume contests.  Several prizes and titles were given out for Mr. Carnevil, Ms. Carnevil and scariest costume.  The winners of the costume contests received a $25 gift card courtesy of UPB and the Diplomats.

The atmosphere was hyped up from the music by D.J. Wade Stegall out of North Carolina.  Spontaneous dance-offs took place throughout the night, including a wobble-off.  The music remained loud until late into the night and the D.J. played a mixture of current songs and classic dance songs.

In addition to music and festivities, students were provided with fresh popped popcorn, snacks, drinks and piles of candy.

“Students at Francis Marion University are interested in dances,” Green said.  “It is important for us to have big events like these that students can look forward to in order to bring the campus community together.  The holidays are always big, so we wanted to just go all out and let everyone have fun.”

This is the fifth year that the Carnevil has taken place at FMU, and it is not expected to stop any time soon.

Possible ideas for next year’s Carnevil Halloween dance includes options such as: a manhunt, a haunted house, group games and holding the event outdoors.  While none of these ideas are set in stone yet, students around campus are already talking about what costumes to wear next year to the event.