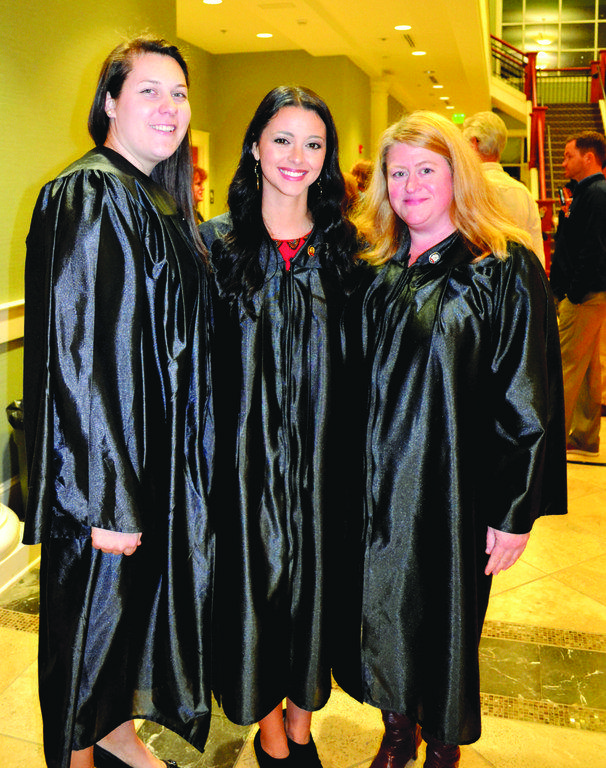 December 10, 2014 marked a special occasion and a historical moment here at Francis Marion University (FMU). At 6 p.m. Francis Marion lost a few of its most outstanding and accomplished students and the nursing field gained some of its most determined, caring and competent future employees.

36 future nurses were pinned Wednesday and the small number alone indicates how challenging the program truly is. After competing with other students for admittance into the nursing program the students must then complete two years of the hardest and most time consuming work they have ever done. It takes a special person, full of dedication and commitment to helping others to make it as far as these students did this fall.

The president of FMU Dr. Fred Carter summed the night up perfectly when he looked out from a behind the podium and said, “to all our nursing students tonight this is a celebration.”

And celebrate is exactly what was done. The ceremony started off with a prayer and then the Chair of the nursing program, Dr. Ruth Wittmann Price began introductions. President Carter then had some words of encouragement and praise for the graduates and then the pinning began.

Dr. Wittmann-Price and Dr. Rhonda Brogdon were the ones given the honor of putting the nursing pins on the graduates. The relief and joy in the faces of the graduates as they walked across the stage and received their final piece of their nursing puzzle was a joy to watch. It was as if they had all took part in winning the most prestigious national championship that was ever played. True happiness could be seen on the faces of all thirty six students, parents, faculty members and anyone else that just so happened to stumble into the ceremony.

The ceremony was concluded with a word of prayer as everyone showed their appreciation and saluted their approval to the 2014 graduating class.

After the ceremony concluded, hands were shaking and refreshments were being poured as everyone celebrated the newest members of the Francis Marion Nursing Program graduates.

Crystal Fulgencio, a BSN graduate, feels an overwhelming sense of relief after receiving her degree.

“It’s like a weight finally lifted off my shoulders,” Fulgencio said. “It has been such a difficult program and I wouldn’t have gotten through it had it not been for my instructors, my class mates, and my faith in God. It’s a happy day the weight is gone and I’m excited to see what’s next.”