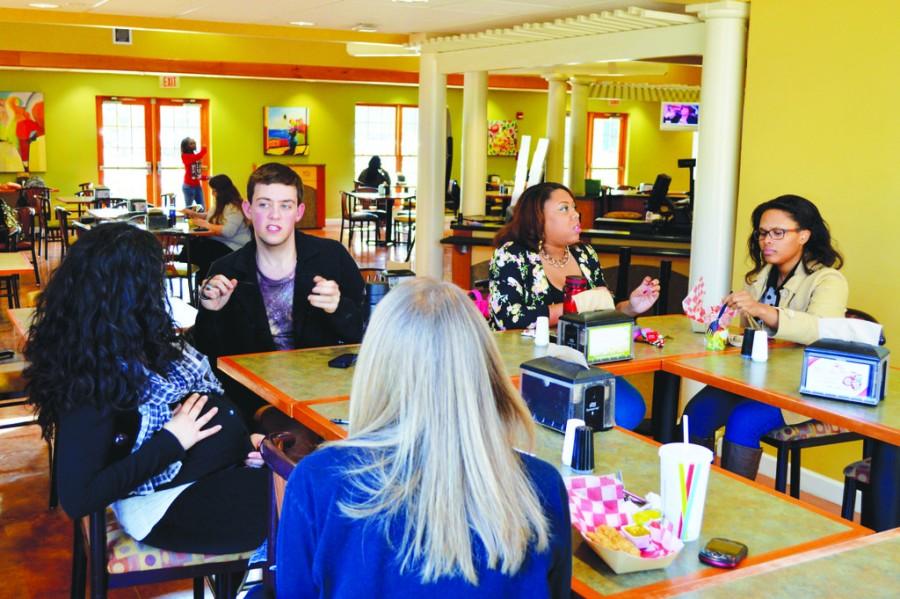 The Spanish department hosted the first of their bimonthly La Tertulia events Tuesday, Jan. 20. The event took place from 2 p.m. to 3 p.m. in the Grille. Others will be held every first and third Tuesday of each month.

La Tertulia has a very long and rich heritage deeply rooted in intellectual and cultural pursuits of scholars and citizens alike. It started in Salamanca, the beautiful capital of the autonomous region Castile and León in Spain, during the seventeenth century and eventually replaced the more formal academic settings. After gaining popularity, it became a common occurrence in many cities such as Madrid and Barcelona and eventually moved to some of the independent colonies. Towards the end of the twentieth century all of the professors, writers, poets and intellectuals in the city would gather in a laidback environment, to discuss multiple topics, share their opinions and debate over many issues of that time. For many centuries, cafes and cafeterias filled with contertulios or tertulianos, the name given to those that frequented the Tertulias, to discuss the current topics and events relating to politics, social issues, culture and their jobs.

Francis Marion University (FMU) has been gifted with the opportunity to celebrate and continue this tradition in Florence, S.C. Participants can sit around a table and discuss anything and everything in Spanish while enjoying refreshments. From classes both past and present, to family antics and vacations, conversation is easy to come by in such a laidback locale. To many people, especially students, La Tertulia is a great addition to school activities. Anyone that attends can meet and make new friends by celebrating and embracing diversity with an old tradition from a different culture. It has definitely helped some of the students at FMU.

“It actually helps me understand someone else’s culture and speaking their language,” Laken Long, a student and attendee of La Tertulia, said. “I am culturally sensitive and I would like to be able to learn different things from other people.”

Introducing this tradition gives an insight to a culture that is steadily growing in the U.S., especially in S.C., which is currently having one of the largest growths of Spanish speakers in the country.

La Tertulia is also a fun way to learn a new language, and it is an event that serves as a way to practice speaking Spanish in everyday conversation rather than just one concentrated subject. It is a chance to listen to different opinions, discuss different experiences, talk about the latest films and books, and connect to other students outside of a formal environment. Students and faculty members can come to brush up on their skills, practice their abilities, exercise their pronunciation and expand their vocabulary.

“The biggest way to learn a language is to actually practice,” Fazio said. “It gives you an opportunity to practice the language you are spending your time learning.”

La Tertulia is not an event exclusively for Spanish speakers. It is open to any FMU student wishing to learn more about the language and how to use it.

“Todas las personas están bienvenidas!” Dr. Maria Garcia-Otero, Spanish professor, said. “It does not matter if you are a heritage speaker or just starting your Spanish classes. The only thing you need is to have the desire to speak Spanish.”