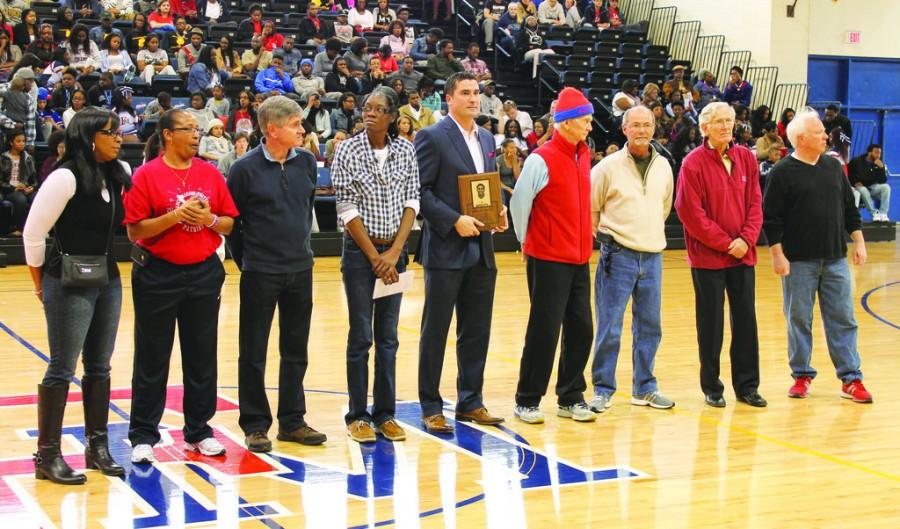 The induction ceremony took place during homecoming activities in the Smith University Center between the women’s and men’s games of the FMU and USC Aiken basketball doubleheader. Bevington and Jones joined 41 current members in the FMU Athletic Hall of Fame.

The pair also threw out the ceremonial first pitch at 1 p.m. Feb. 22 during the baseball game between FMU and Armstrong State University on Cormell Field at Sparrow Stadium.

Bevington, a native of Westerville, Ohio, starred on the Patriot soccer team from 1998 to 2001, including the 2000 squad that spent two weeks ranked No.1 in the nation and reached the NCAA Division II national quarterfinals.

Bevington was a two-time All-Region and All-Peach Belt Conference (PBC) selection, and garnered third-team All-American honors as a junior. He helped FMU to a four-year mark of 56-18-6, including a three-year stretch from 1999-2001 that saw the Patriots appear in 22 of 23 national Top 25 polls.

Bevington appeared in 79 career matches, which still holds a school record. He tallied five goals and three assists from his defender position. He helped anchor a defense that allowed only 85 goals in 80 matches and that posted 31 shutouts.

He helped FMU capture the 1999 PBC Tournament Championship.  The following year, FMU won the PBC regular-season title, registered a school-record 17-match winning streak and ended the year ranked No. 6 nationally with a 17-3-1 record.  Bevington converted the deciding kick in a penalty-shootout win over Clayton State in the opening round of the NCAA Tournament.  The Patriot defense ranked 10th nationally in shutout percentage (.476) and recorded a school-record 10 clean sheets.

At the conclusion of the 2000 season, he garnered All-America, All-Region and All-Conference recognition.

Bevington was tabbed the team Most Valuable Player in 2001, while also gaining All-Conference and All-Region accolades.

Graduating with a B.S. degree in history, Bevington was named to the PBC Presidential Honor Roll four times and was the FMU Swamp Fox Athletic-Academic Honoree three times. Bevington was a member of the national honors society for history Phi Alpha Theta.

Following his playing career at FMU, Bevington played one season with the Cincinnati Riverhawks of the USL Division I’s A-League.

Bevington currently resides in Carmel, Ind., and is the director for Cydcor, LLC, a company he has been with for six years.

Jones played three seasons as a Patriot after transferring from Coastal Carolina University.  He posted a 29-14 career record with a 2.75 earned run average.  He made 53 pitching appearances at FMU and completed 29 of his 41 starts.  He fanned 315 batters in 334 innings while issuing only 53 walks. He still holds the PBC record for most complete games in a career and is fourth in career strikeouts.

During his three seasons, Jones helped the Patriots to an 85-64 combined record.

In his first season at FMU, Jones went 12-6 with one save and a 2.29 earned runs average (ERA).  He finished 11 of 14 starts and ranked second nationally in innings pitched, seventh in victories, and 19th in earned run average. He set a Patriot record for strikeouts in a season (106) that he broke in 2003.

As a junior, he posted a 9-5 record with a 3.09 ERA and 11 complete games in 14 starts, while helping FMU to a No.18 national ranking and the program’s first NCAA tournament bid in 10 seasons.  In six of his starts, he registered double-figure strikeout totals en route to a season-record 119 strikeouts.  He earned team Most Valuable Player (MVP) honors, was named to the All-Conference team, and garnered first-team All-Region recognition.

In 2004, Jones went 8-3 with one save and a 2.88 ERA with seven complete games in 13 starts.  He was named the FMU MVP and picked up All-Conference and All-Region honors.  He was also named to the District All-Academic squad.

Following the season, the New York Mets drafted Jones in the 31st round of the 2004 Draft, but he chose to concentrate on his professional career in the nursing field.

Jones earned a B.S. degree in biology with a 3.5 grade point average.  He was inducted into the national college athlete honor society, Chi Alpha Sigma and was a three-time honoree to both the PBC Presidential Honor Roll and the FMU Swamp Fox Athletic-Academic Honor Roll.  He later earned a nursing degree from the cooperative FMU/MUSC program in 2006.

Jones resides in Dillon with his wife and two children.  He is in his 11th year working as a registered nurse at McLeod Regional Medical Center.