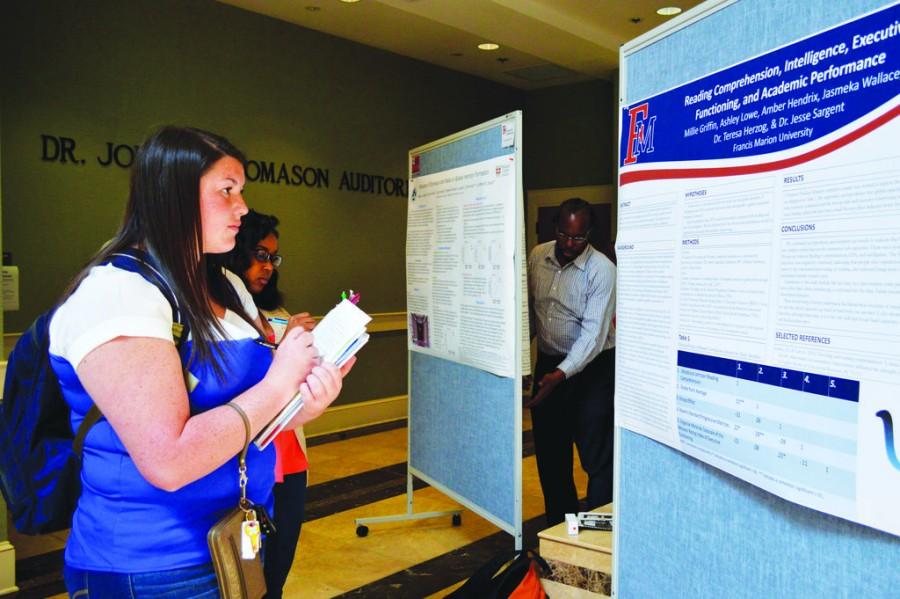 RED is a day where students from all departments on campus can come to share their interests and projects.

“All of the departments and schools on campus have their own events [to present research], but we wanted something that could bring everybody together at one event instead of having individual events,” Wrighten said. “This way people at the university can see what is going on outside of their departments and their schools and unify.”

During the afternoon segment of RED, each presenter had a 30-minute time slot to present their research. Attendees were able to ask questions after each presentation for clarification.

Emma Shilowich, an aspiring physical therapist visiting from Wake Forest University, came to the event to gain more knowledge in the sciences.

“I just wanted to see what different areas people were interested in and see what new stuff people are researching,” Shilowich said. “Its things I have never thought of. It’s important for other students to see what their peers are doing in the future of science. I would change the location of the event [to somewhere] that is more open.”

Yet science is not the only department that is represented at RED. Matthew Adkins, a senior theater major at FMU showcased his sketches of his costume designs inspired by a play set in the 1840s. Matthew’s presentation was a reminder that every field takes time to prepare for their projects.

“I think it’s important for people to know, even in art fields that there is a lot of research that goes into everything that we do,” Adkins said.

“Everything I’m sharing [has a reason] as to why it’s styled that way. Most often in history, things were shaped and stylized based on political statements, and that’s something I think we are kind of losing,” Adkins said.

Designers, including costume designers, recreate outfits and, in some cases, create original outfits. Their creativity is in turn shared with the world.

“I’m sharing the history, and I want them to appreciate that because I think we keep it alive that way,” Adkins said.

The research project conducted by Dr. Daljit Kaur, assistant professor of School of Education, provided an addition to RED. The project explored the possibilities of using iPads as a motivational tool in the classroom.

“This research was conducted to see if iPads can help promote math skills of students with learning,” Kaur said. “Two of my undergrad students worked with me on this project. During the fall of 2014, 10 FMU teacher candidates for the School of Education tutored 10 students with learning disabilities from a local elementary school. They found that the iPads did help to promote their math skills, their scores had improved, they were motivated to learn math, and it increased their confidence.”

RED is a diverse learning event, especially in the sciences. Morgan Soulantikas, a senior biology major, showed her interests in behavioral ecology and animal biology by explaining how she monitored the activities of the American crow.

“The biology department was able to purchase some new equipment,” Soulantikas said. “They are bioacoustics recording devices, which are microphones you can leave outside to record animal sounds. I started a preliminary project just to collect data on the vocalizations of a specific species, and I chose the crow because they’re in abundance on campus.”

Soulantikas chose Dr. Jeff Steinmetz as her advisor because of the interest his class sparked for her. According Dr. Lori Turner, biology students can look for research projects by checking the research board outside of the biology department.

“If a student wants to do some independent research, they should talk to a specific professor or consult our research board that is right outside of the main biology office,” Dr. Turner said. “It has a description of many professors who are doing a specific project, the students will be able to inquire about any openings for students to work on the project.”

If a student does not see an experiment they are interested in, they can simply ask a professor if they are currently conducting an experiment.

“I also recommend talking to the professor in case the professor does not have any openings,” Dr. Turner said. “The student can express interest.”