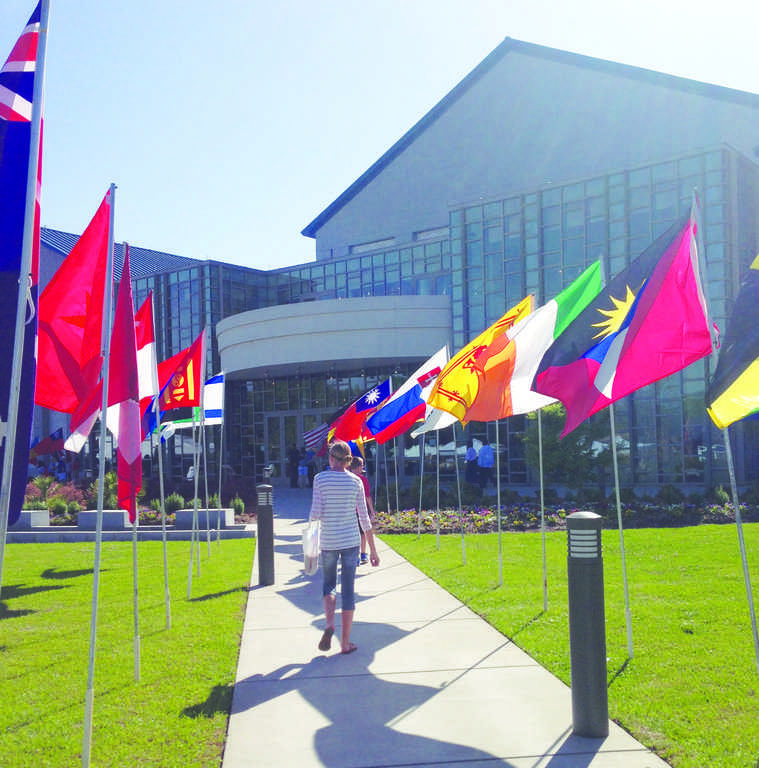 Downtown Florence was blocked off on Saturday, April 11 as the sound of bagpipes filled the streets and the smell of foreign cuisines wafted through the air during the annual Arts International Festival at the FMU Performing Arts Center.

Florence and FMU collaborated on the Arts International festival.  FMU’s vice president for developments, Darryl Bridges, and theater professor, Keith Best, were among those who helped put the event together.  The festival has been held on campus for almost 40 years, and this was the first time it was held downtown.

They moved the location of the event to utilize the newer facilities downtown, and individuals like Mayor Stephen Wukela wanted to enhance the festival and allow citizens of Florence to enjoy the downtown area.

Darryl Bridges said that planners for the festival have been working on this event since September 2014.

“Every year we try to secure high-quality performers that offer a broad array of cultural diversity to the festival, and this year was no different,” Bridges said. “We identify potential acts through a variety of methods including referrals, performing arts agencies and past experience.”

Certain streets in downtown Florence were blocked off for the event. There were multiple activities throughout the day, from noon to 6 p.m., happening simultaneously. For example, while FMU’s Music Industry Ensemble performed covers of songs, there was face painting done in the Children’s Activities booth. There was a welding competition going on while different vendors gave out free samples of Cajun or Italian cuisine. Some of the venders charged for full plates of food.

Chef John King did a cooking demo twice that day. One of his 30-minute demos taught the viewers how to cook jerk chicken with some extra flavor. Jerk chicken is a Caribbean dish. He cooked white rice with pineapples and papayas, chicken breasts, cabbage, carrots and peppers.

As he cooked the meal, the viewers were allowed to ask questions. King said he wants people to try new dishes.

“If you are stuck on one cuisine, you don’t know what the other part of the universe is about,” King said. “I, over the years, learned how to adapt and taste all foods from different cultures; it rounds your pallet out.”

King said he did the demo for many reasons. One of those reasons was to let the public know about the opening of his first restaurant, Cooking at Rocky’s.

“I wanted to show my talents and skills,” King stated. “I wanted [the audience] to be aware of a new restaurant coming to town.”

Food was not the only attraction at the festival. There was an acrobat crew from Africa, the Jabali African Acrobats who showcased their talents. Most of the men in that crew are relatives, and they have been working on acrobatics since they were young boys.

Lawrence Karisa was with the acrobats.

“We like to make people happy,” Karisa said. “For us, it is an honor to perform somewhere kids and grown people can laugh, smile and get culture.”

As the day went on, artisans sold their crafts, showcasing works from a variety of cultures. There was a man who gave away free Japanese yo-yos, a woman who sold sweet grass baskets and roses, which are common in Charleston, S.C., and a woman who sold knit, crocheted and yarn creations. These artisans were from all over the Southeast. Debbie Gaskins, who sold yarn creations, sells primarily in Georgia while the woman who sold sweet grass baskets, Ruth, sells primarily in Charlotte, N.C.

The children were able to have their faces painted. The artists who painted the children’s faces had a sheet full of symbols, instruments and animals.

To add to the cultural event, the group Stirling Bridge performed twice that day. They combined Celtic bagpipes with guitars for Celtic rock ‘n’ roll. The members of the group donned kilts. Tripp Rogers is a guitarist and vocalist for the group. He said they travel all over the Southeast to the Carolinas, Florida, Virginia and Tennessee to perform their music.

“So many folks from the southeast have their roots in Scotland or Ireland,” Rogers said. He went on to say his band is not the only Celtic band to have a southern rock style.

“A lot of the roots of our contemporary music comes from Celtic melodies and folk songs,” Rogers said.

He also said he was impressed by how FMU supports the arts, and his group appreciated being a part of the festival.

“We couldn’t be more pleased with the response to the 2015 Arts International Festival,” Bridges said. “The feedback received from participants was overwhelmingly positive, and we are already planning for next year’s event.”