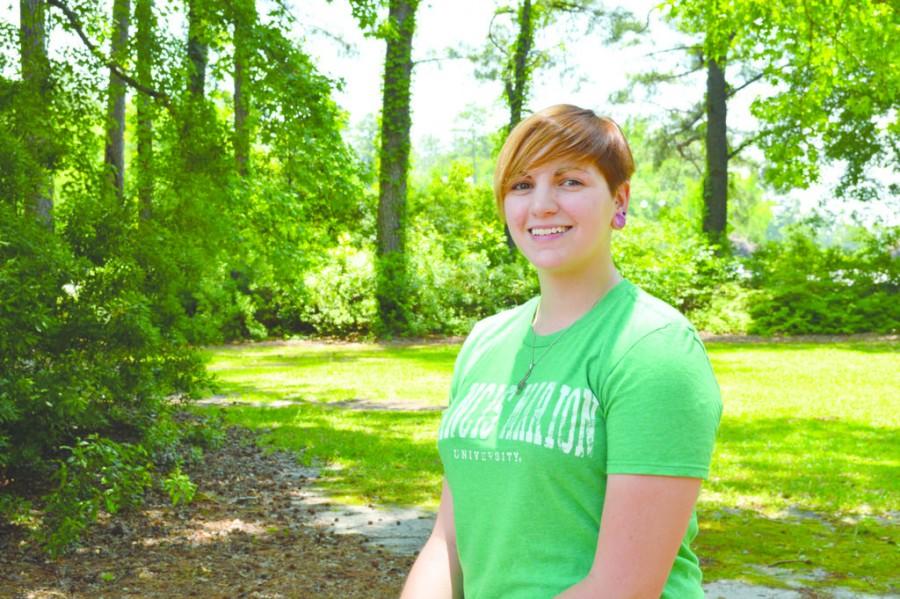 Morgan Soulantikas spent her last two years as an undergraduate studying the caws of the American crow.

Soulantikas began this research project when she changed advisors, and her new advisor, Dr. Jeffery Steinmetz, received new bioacoustics monitoring equipment through the FMU Ready to Experience Applied Learning (REAL) Grant in 2013, and they began discussing the possibilities of research with the new equipment.

For the last two years of her time at FMU, Soulantikas conducted research on the types, patterns and frequencies of American crow calls. She placed the Song Meter SM2+, an instrument used to record bird calls, at different locations on campus until she could find a good variety of calls to study.

“I went through many different ideas and brainstorming sessions when it came to the design of this experiment,” Soulantikas said. “Since this was a pioneer study involving brand new equipment, the beginning stages consisted of a lot of trial and error and just playing it by ear. Sometime you just have to see what you have to work with before you decide what direction you want to go in.”

The Pee Dee has a large population of American crows, and their crow calls are easily distinguishable from other birds. This made recording and tracking crows easy for Soulantikas to do.

“I wanted to shed some positive light on the species in some way,” Soulantikas said. “They are incredibly intelligent animals, so the fact that they just intrigue me, definitely played a part when I chose them.”

Soulantikas started her observations in August 2013, and she wrapped up the trials in March 2015. Over the course of two years, Soulantikas recorded samples from each season and recorded three common crow calls: the simple scolding call, the modified scolding call and the alert call. She spent most of her time in the biology office searching for calls through hours of recordings for calls and analyzing her research.

With the help of three FMU professors, Dr. Jeffrey Steinmetz, Dr. Paul Zweirs and professor Travis Knowles, Soulantikas was able to design and carry out this pioneering research with the Song Meter SM2+. She spent a considerable amount of time with Steinmetz to make sure she was getting viable results.

“Dr. Steinmetz was my main advisor for this project and assisted me in every aspect of the research,” Soulantikas said. “I always checked in with him at least once a week to give him an update on my progress and to ask any questions that I had. He was a huge help when it came to the analysis!”

After she completed her research, Soulantikas was invited to present her findings at four different research symposiums, including the Program for Undergraduate Research Experience (P.U.R.E.) Symposium in 2014 and 2015.

Soulantikas worked and interned at the Lynches River County Park and graduated May 2015. She is currently attending graduate school in Minnesota and has been awarded the FMU Biology Research Award for 2015. Soulantikas’ work will also be published in the annual Journal of the South Carolina Academy of Science.